A big part of tonight’s episode centered around Carl and Enid. But some fans have forgotten an important plot point from last season and are trying to remember just how Carl lost his eye. We’ve got the details here, in case you need a refresher.

Although it may feel like a long time ago, it really hasn’t been that long since Carl lost his eye. In fact, the big scene happened in February 2016, during the mid-season premiere for Season 6 of The Walking Dead. If you recall, Alexandria was overrun by zombies. Everyone was covered in blood and trying to sneak out. Sam and his mom were among those trying to escape, but Sam freaks out and gets the zombies’ attention. At that point, his mom Jessie also freaks out and the zombies attack and eat them.

One of the most chilling parts was how she wouldn’t let go of Carl’s hand while she was being eaten.

Then, Jessie’s other son, Ron, was enraged. He had hated Carl and Rick the entire time. He blamed them for everything. He raised his gun, and it looked like he was aiming for Rick. Michonne tried to stop him, but he pulled the trigger and shot out Carl’s eye!

Here’s the scene below, if you want to watch it again. But warning — it’s pretty gruesome: 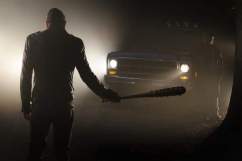 Who Are The Saviors on ‘The Walking Dead’?

Read More
AMC, The Walking Dead, TV
Carl was a big part of tonight's episode. Some fans have already forgotten how he lost his eye, so here's a quick recap.