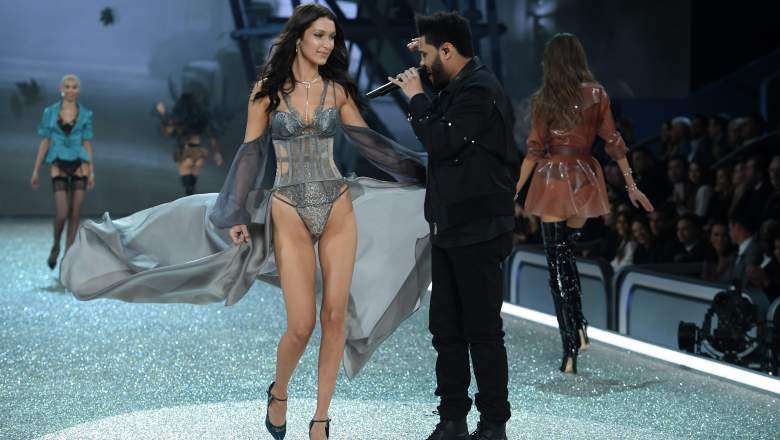 They may be broken up, but it appears that The Weeknd and Bella Hadid are still on good terms. During the 2016 Victoria’s Secret Fashion Show, Hadid and The Weeknd (Abel Tesfaye) smiled and made plenty of eye contact on the runway, leading fans to wonder if there’s a chance the couple will get back together.

After the show, Bella took to Instagram with a sweet post about her ex, writing, “Thank you @theweeknd for being the best and most incredible performer on the planet. You KILLED it, as always.” She finished it off with a heart emoji.

It’s possible there’s still something between The Weeknd and Bella– after all, the model was seen looking at old photos of the singer on her phone just days ago. On November 30, Hollywood Life reported that on the plane headed to Paris, fellow model Kelly Gale took a Snapchat video of Bella looking at a photo of her and Tesfaye kissing.

Leading up to the famous Victoria’s Secret Fashion Show, Hadid promised there would be “no awkwardness” between her and The Weeknd. She even told The Daily Mail that the two are still “best friends.”

The couple split in early November after 18 months of dating because of their hectic schedules. At the time, a source told People, “Their schedules have been too hard to coordinate and he is focusing on finishing and promoting his album… They still have a great deal of love for one another and will remain friends.” Hadid and the Starboy singer first became romantic after Tesfaye asked Bella to be in the artwork for his album, Beauty Behind the Madness. Bella then went on to star in the music video for  his song, “In the Night.”

Fans certainly noticed the former couple’s interaction on the runway during the VS fashion show, and took to Twitter with their comments.

How you want to look when you see your ex for the first time versus how you actually look pic.twitter.com/GNtjHSEsim

I call this: The One That Got Away pic.twitter.com/EtiAJvZdDZ

If you ever see your ex out in public, remember to walk by him like Bella Hadid walked by The Weeknd at the #VSFashionShow pic.twitter.com/ChDaQxpxW7

Read More
Bella Hadid, Celebrities, The Weeknd
Bella Hadid and former boyfriend The Weeknd got close during the 2016 Victoria's Secret Fashion Show. Are the two back together? Get the details here.