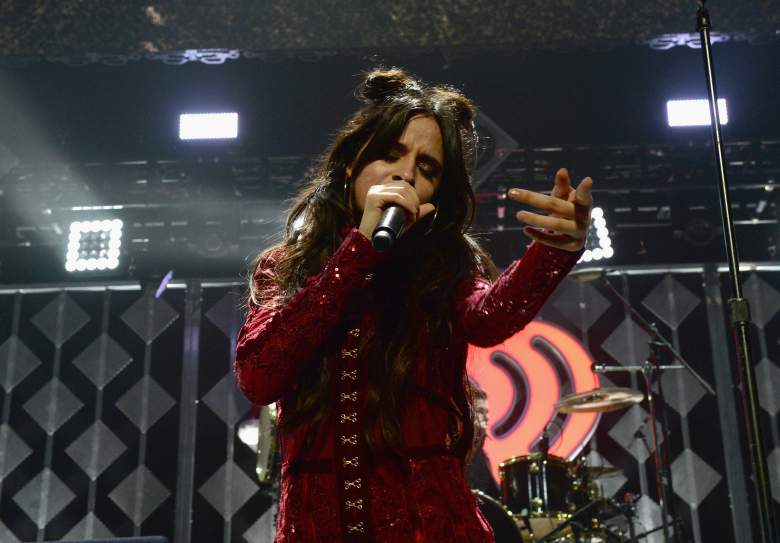 Fifth Harmony will now be only a four-member group. The group announced early Monday that Camila Cabello is no longer a member of the band and deleted her Twitter handle from their official Twitter bio. Although there had been rumors of tension between Cabello and the other members of the group, Cabello tweeted that she was blindsided by the news.

Cabello is currently single and previously dated Austin Mahone in 2014. There was speculation that she was dating Shawn Mendes, but Seventeen notes that she stressed this summer that they are just friends.

Here’s a look at Cabello’s departure from the band and her career.

1. Cabello’s Contract With Fifth Harmony Ended on December 18, the Day Before Her departure Was Announced

Sources for Billboard said that there was tension between Cabello and the other members of the group. She has already scored two hit singles outside of Fifth Harmony, including “I Know What You Did Last Summer” with Sean Mendes in 2015 and this year’s “Bad Things” with Machine Gun Kelly.

The site reports that Cabello’s contract with the group ended on December 18. Therefore, they decided to just not offer her a new contract.

The news that Cabello wasn’t coming back to work on Fifth Harmony’s third record came in the above tweet. In the statement, the other four members – Lauren Jauregui, Ally Brooke, Normani Kordei and Dinah Jane – all insist that the group will be continuing on.

The statement reads, in part:

After 4 and a half yeas of being together, we have been informed via her representatives that Camila has decided to leave Fifth Harmony. We wish her well.
You Harmonizers have been there with us since the beginning, you’ve supported us, you’ve rejoiced and cried with us, you’ve grown with us, and with your love and support, we will continue on. That being said, we are excited to announce that we will be moving forward with the four of us – Ally Brooke, Normani Kordei, Dinah Jane and Lauren Jauregui for our fans. We are four strong, committed women who will continue with Fifth Harmony as well as our solo endeavors. 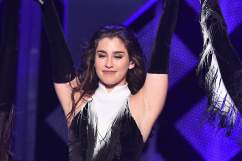 2. Cabello Says She Was ‘Shocked’ to Read the Statement & Said That it’s ‘Simply Not True’ That Her Reps Told Them She Was Leaving

In her version of events, posted in the above tweet, Cabello said that she was “shocked” to read the statement posted on Fifth Harmony’s Twitter page. She wrote that the other members were “aware of my feelings through the long, much needed conversations about the future that we had during” the international tour for 7/27.

Cabello claims that it isn’t true that her representatives told the group she was planning on leaving because she had plans to stay with the group while pursuing solo projects. She didn’t intend to leave the group this way.

“I will continue to root them all on as individuals and as a group, I wish nothing but the best for them, all the success in the world and true happiness,” she wrote.

After Cabello’s statement, Fifth Harmony posted another letter, claiming that Cabello’s manager told her she was leaving the group in mid-November. 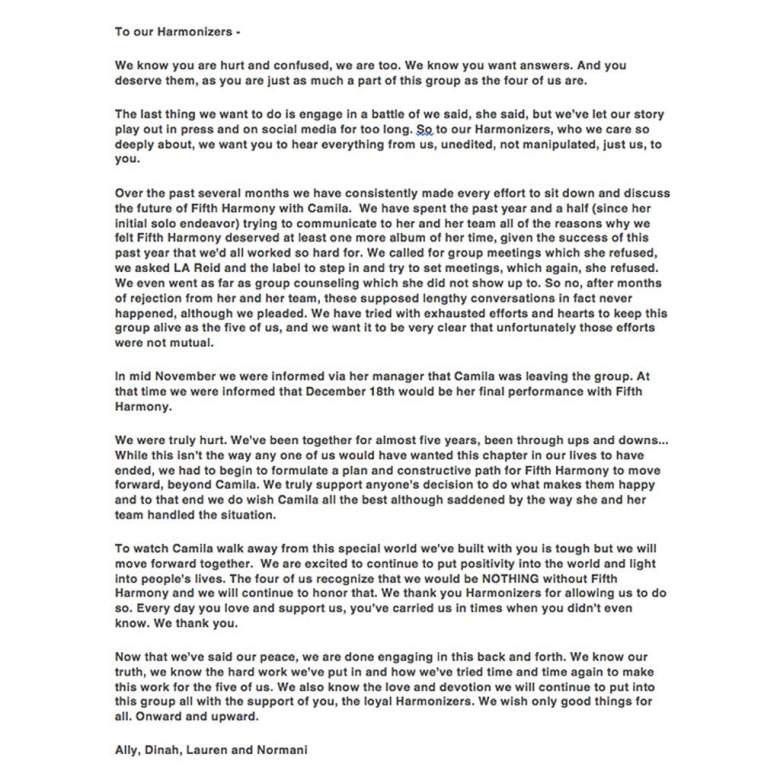 Fifth Harmony posted the above statement in response to Cabello’s message. (Twitter/Fifth Harmony) 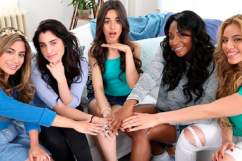 Fifth Harmony Performs on ‘Dancing With The Stars’ Finale

3. Cabello Left a St. Louis Show in September Early Due to ‘Anxiety’ & Felt Exhausted During the Tour

Fifth Harmony spent the fall on an international tour for their second album, 7/27, and it wore the 19-year-old Cabello out. Before a show in Hollywood, she tweeted, “just wanna sleep for 3 days.”

During a September show in St. Louis, Cabello left the show in the middle of it, The St. Louis Dispatch reported in its review. Us Weekly reported that Cabello blamed her early departure on “exhaustion.”

“Hi Missouri, sorry I couldn’t finish the set last night,” Cabello wrote on Snapchat after the show. “Was having too much anxiety and couldn’t finish it. I love u. I’m truly sorry.”

Cabello was back on stage for the following show in Dallas.

Incidents like these only seemed to add fuel to rumors that started this year about Fifth Harmony breaking up. In August, Kordei sent out a message on Twitter, insisting that they weren’t splitting up.

Cabello was born in Cuba and immigrated to the U.S. when she was almost 7 years old. Cabello told her story in an October column for Pop Sugar.

Cabello wrote that her father is Mexican, so her family often traveled between Mexico City and Havana. When she turned 7, her parents decided to move to the U.S., where they had no family.

“With a couple hundred dollars, the clothes on our backs, no family in the United States, and no clue of what was going to happen next, that’s exactly what we did. Like my mom said, ‘I don’t know where I’m going, but I can’t stay here,'” Cabello wrote. “And that was enough.”

She wrote that her mother told her that they were going to Disney World. During the 36-hour bus ride to Miami, she remembered writing in a Winnie the Pooh journal constantly.

Cabello’s mother was an architect in Cuba, but the degrees she earned did there did not help her find a job in the U.S. She found a job at a Marshalls and took night courses in English. Her father came from Mexico a year and a half later.

When she was in 9th grade, Cabello asked her parents to take her north to Greensboro, North Carolina, where she could audition for The X Factor. Her parents agreed and that changed her life forever. After she was eliminated, the group Fifth Harmony was formed with four other eliminated contestants.

“I am so proud to be Cuban-Mexican,” Cabello wrote for Pop Sugar. “This country was built on immigrants. People who were brave enough to start over. How strong we are to leave behind everything we know in hopes of something better.”

5. Cabello Already Has a Platinum-Selling Solo Single with ‘I Know What You Did Last Summer’

Cabello has already started her solo career on the right foot. Last year, she collaborated with Shawn Mendes on the song “I Know What You Did Last Summer.” The track, which was featured on his album Handwritten Revisited, was certified Platinum by the RIAA. (That means it’s sold at least 1 million digital copies.)

Her second hit outside Fifth Harmony is “Bad Things” with Machine Gun Kelly. On December 12, the track hit No. 10 on the Billboard Hot 100. The song also topped the Pop Digital Songs Sales chart after they performed it on The Tonight show Starring Jimmy Fallon on November 30.

Jauregui has also started her own solo career. She appeared on Marian Hill’s “Back to Me” single.