Reynolds and Fisher pose in the press room during the 21st Annual Screen Actors Guild Awards at The Shrine Auditorium on January 25, 2015 in Los Angeles, California. (Getty)

Reynolds, 84, was rushed to the hospital on December 28 after experiencing breathing issues, TMZ reports. The celebrity news website reports that Reynolds possibly suffered a stroke. She died a few hours after she was taken to the hospital, her son, Todd Fisher, said.

On December 27, Fisher succumbed to the massive heart attack she suffered on a flight from London to Los Angeles. She was 60 years old. Reynolds had been updating the public on her daughter’s health while she was in the hospital.

Todd Fisher tells @ABC his mom @DebbieReynolds1 died today, just a day after her daughter. “She wanted to be with Carrie,” he told @Variety.

Fisher was one of the two children born to Reynolds and her singer husband Eddie Fisher. The couple split in 1959 after a four-year marriage. Their divorce was as a result of Eddie Fisher’s affair with Elizabeth Taylor.

In January 2015, Reynolds told Vanity Fair that she “understood” why Eddie Fisher left her for Taylor.

Despite a long feud, Reynolds and Taylor reconciled their friendship in the 1990s. The Daily Mail reported in 2013 that Reynolds had inherited Taylor’s jewelry upon the star’s 2011 death.

The relationship between Fisher and her mother was topic of the semi-autobiographical 1990 movie, Postcards From the Edge. The film was penned by Fisher.

Why all the fuss about Carrie's admitting she had an affair with Harrison Ford? I have to admit I slept with her father! New book on 11/22! pic.twitter.com/nRPWB4ugK5

In November 2016, when Fisher divulged that she had an affair with co-star Harrison Ford during the filming of the original Star Wars movies, Reynolds tweeted, “Who cares?”

When the movie was released, producer Fisher Stevens, told Page Six, “The mother-daughter story makes you think about your own family, mortality. Until recently, Debbie, 84, did her nightclub act. Now ailing, winding down, she’s retired. Less mobile, not getting around, she loved the documentary and said, ‘Wish we’d done this sooner.’”

In May 2016, Fisher told the media that her mother was suffering from a spinal issue. She added that Reynolds was “frail.” 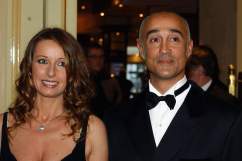