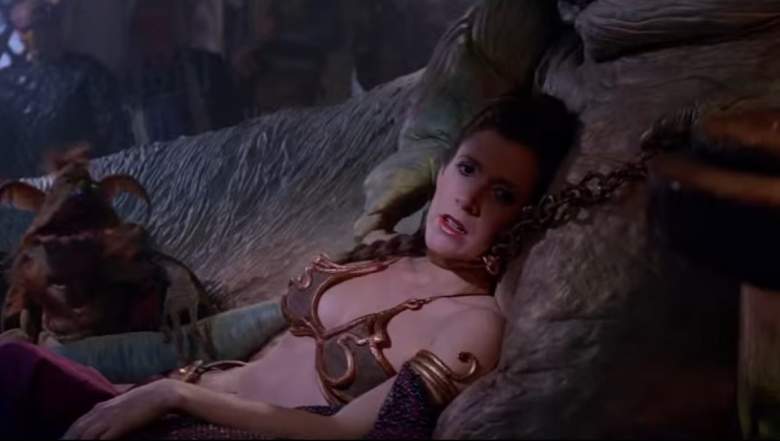 Carrie Fisher, who died on Tuesday at age 60, had several iconic looks as Princess Leia during the original Star Wars films, but none were as famous as the gold bikini she wore in Return of the Jedi. Fisher did not care for the costume and never shied away from talking about it. She even told Daisy Ridley, who plays Rey in the new films, to make sure she never has to wear a slave costume like she did.

In Return of the Jedi, Leia wears the costume after being captured by Jabba the Hutt during an attempt to rescue Han Solo (Harrison Ford). Jabba thinks he can humiliate Alderaan’s princess, but all she is doing is waiting for the opportunity to kill Jabba during the action over the Sarlacc pit.

Even during the media tour for Return of the Jedi, Fisher was trying to explain why there was a scene with her in a gold bikini. She told Rolling Stone in 1983 that it was a way to soften the character’s image.

“The only way they knew to make the character strong was to make her angry,” Fisher explained to the magazine. In Return of the Jedi, she gets to be more feminine, more supportive, more affectionate. But let’s not forget that these movies are basically boys’ fantasies. So the other way they made her more female in this one was to have her take off her clothes.”

As The Washington Post noted last year, The Making of Star Wars: Return of the Jedi includes an interview with Fisher, who complained about how difficult it was to wear the bikini.

“This was no bikini. It was metal. It didn’t go where you went,” Fisher recalled in the book. “After the shots, the prop man would have to check me. He’d say, ‘Okay tits are fine. Let’s go.’ So I started checking for any bounce or slip after takes. Then it was, ‘Cut. Hey, how they doin’, hooters in place? Tits all right?’ I was embarrassed at first with a hundred guys going crazy over my revealed self. Dignity was out of the question.”

In a 1983 interview with People, she made a similar comment about how uncomfortable the outfit was. “I started checking for any bounce or slip after takes. It was, ‘CUT. Hey, how they doin’? The hooters in place?'” she told the magazine.

Chris Taylor wrote in How Star Wars Conquered The Universe that Fisher was concerned about how the Slave Leia image would be used outside the film. “I told George [Lucas], ‘You have the rights to my face…You do not have the rights to my lagoon of mystery,'” Fisher once said, according to Taylor.

In an October 2015 interview with Ridley for Interview Magazine, Fisher told the young actress to fight against wearing a slave costume.

“Well, you should fight for your outfit. Don’t be a slave like I was,” Fisher told Ridley. She later added, “You keep fighting against that slave outfit.”

Although Fisher didn’t care for wearing the costume, she was not happy with the idea of banning toys and merchandise that showed the costume. In July 2015, there was a mild uproar about a new Hasbro figure of Leia in the costume, even though the toy company has been making figures of her in the outfit since 1997.

“I think that’s stupid,” Fisher told the Wall Street Journal. She had the perfect advice for a parent who wants to explain the costume to their kids:

The father who flipped out about it, “What am I going to tell my kid about why she’s in that outfit?” Tell them that a giant slug captured me and forced me to wear that stupid outfit, and then I killed him because I didn’t like it. And then I took it off. Backstage.

In a November 2016 interview with NPR, Fisher said she used the bikini outfit as Leia’s motive for wanting to ill Jabba.

Fisher did end up wearing the costume for that 1983 Rolling Stone interview. In that same interview, she reminded us that movies are dreams.

“What redeems it is I get to kill [Jabba], which was so enjoyable,” she told NPR of the costume. “I sawed his neck off with that chain that I killed him with. I really relished that because I hated wearing that outfit and sitting there rigid straight, and I couldn’t wait to kill him.”

“Movies are dreams! And they work on you subliminally. You can play Leia as capable, independent, sensible, a soldier, a fighter, a woman in control – control being, of course, a lesser word than master,” Fisher told Rolling Stone. “But you can portray a woman who’s a master and get through all the female prejudice if you have her travel in time, if you add a magical quality, if you’re dealing in fairy-tale terms. People need these bigger-than-life projections.”