Just over three years after Frozen began its quest for world domination, Disney and ABC are bringing the movie to network television. Frozen makes its network broadcast debut on Sunday, December 11 at 8 p.m. ET, surely starting a holiday tradition for ABC. Read on for a preview of the movie.

Frozen is loosely based on Hans Christian Andersen’s The Snow Queen and is about Anna’s quest to find her sister, Queen Elsa, and convince her to end the perpetual winter that has frozen their kingdom. The screenplay was written by Jennifer Lee, who is also received “Story By” credit with Chris Buck (Tarzan, Surf’s Up) and Shane Morris. Buck and Lee co-directed the film, making Lee the first woman to direct a Disney Animation feature film.

A sequel to Frozen is in the works, as Kristen Bell confirmed to Collider in March that she was heading back to the recording studio. Disney also produced Frozen Fever, a short film that played before Cinderella in 2015. 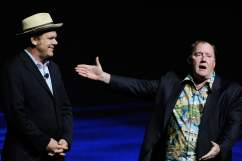