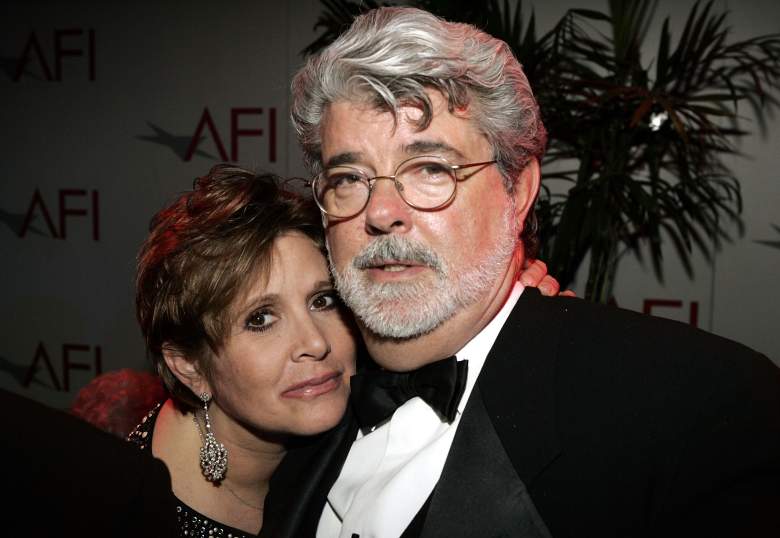 George Lucas and Carrie Fisher in 2005, when he received the AFI Lifetime Achievement Award. (Getty)

Star Wars creator George Lucas issued a statement on December 27, moments after the death of Carrie Fisher was announced. Fisher died at a hospital in Los Angeles at age 60 following a heart attack on December 23.

In his statement, Lucas remembered Fisher as a friend he’d known for most of his life and recalled her “very colorful personality that everyone loved.”

Carrie and I have been friends for most of our adult lives. She was extremely smart; a talented actress, writer and comedienne with a very colorful personality that everyone loved. In Star Wars she was our great and powerful princess – feisty, wise and full of hope in a role that was more difficult than most people might think. My heart and prayers are with Billie, Debbie and all Carrie’s family, friends and fans. She will be missed by all.

Lucas and Fisher were such close friends that Fisher was allowed to roast Lucas when he received the AFI Lifetime Achievement Award for his contributions to film.

Walt Disney CEO Bob Iger, whose company bought Lucasfilm in 2012 and produced The Force Awakens in 2015, offered condolences to Fisher’s family as well. His statement, along with a statement from Lucasfilm president Kathleen Kennedy, was posted on StarWars.com.

Carrie Fisher was one-of-a-kind, a true character who shared her talent and her truth with us all with her trademark wit and irreverence. Millions fell in love with her as the indomitable Princess Leia; she will always have a special place in the hearts of Star Wars fans as well as all of us who were lucky enough to know her personally. She will be sorely missed, and we join millions of fans and friends around the world who mourn her loss today.

Carrie holds such a special place in the hearts of everyone at Lucasfilm it is difficult to think of a world without her. She was Princess Leia to the world but a very special friend to all of us. She had an indomitable spirit, incredible wit, and a loving heart. Carrie also defined the female hero of our age over a generation ago. Her groundbreaking role as Princess Leia served as an inspiration of power and confidence for young girls everywhere. We will miss her dearly.

Harrison Ford, who played Han Solo in the Star Wars films, wrote in a statement:

Carrie was one-of-a-kind… brilliant, original. Funny and emotionally fearless. She lived her life, bravely…My thoughts are with her daughter Billie, her Mother Debbie, her brother Todd, and her many friends. We will all miss her.

J.J. Abrams, who directed The Force Awakens, posted a handwritten note on Twitter:

Fisher played Princess Leia in A New Hope, The Empire Strikes Back, Return of the Jedi and The Force Awakens. She also filmed scenes for Episode VIII, which comes out in December 2017.

To see how other members of the Star Wars family remembered Fisher, click below: