Many know James Kennedy from the reality show Vanderpump Rules, where he is the outspoken DJ and restaurant employee who has become a thorn in the side of star Lisa Vanderpump. When Kennedy first joined the show, he revealed that he is actually the godson of George Michael. Read on for the facts on Kennedy’s connection to Michael and his life in the spotlight.

According to Bravo, George Michael grew up with Kennedy’s father and also worked with him. Andros Georgiou is Kennedy’s dad. He and Michael’s fathers came from the same village in Cyprus and they each emigrated to London to make a life filled with family. The two fathers’ friendship helped Michael and Georgiou to become buds as well.

Georgiou went on to manage Michael in WHAM! and his record company Aegean Records. 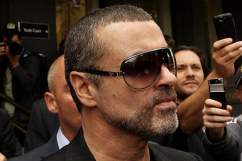 George Michael Was Not Married When He Died

2. Kennedy’s Dad Andros Georgiou Named One of His Children After Michael’s Late Lover

Georgiou was very close with George Michael throughout his life and was fond of some of his lovers, in particular, Anselmo Feleppa, who died of HIV in the 1990s. It was actually Georgiou who received the news of Feleppa’s death and delivered the unfortunate news to Michael. Georgiou revealed in an interview with The Sun that:

The day after Anselmo passed, my wife Jackie told me she was pregnant. I couldn’t believe the timing, I took this as a sign — as one life leaves, another one arrives. Nine months later Harrison Anselmo Georgiou was born, named in honor of one of the nicest people you could ever want to meet, and, of course, Yog was to be his godfather.

Below is a photo of Georgiou’s three sons, including Harrison, who is on the left.

James Kennedy’s mother is actress and model Jacqueline Georgiou, who separated from Kennedy’s father this past year. 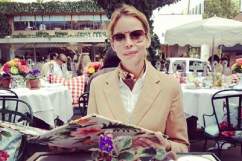 3. Michael Did Not Have Children of His Own

Happy Birthday Uncle @GeorgeMichael I know it's been a long time, your'e in my prayers. See u soon one day I hope❤️ pic.twitter.com/JJ6sHDdHMd

While James Kennedy is Michael’s godson, Michael did not have any kids of his own. In an interview with The Independent in 2011, Michael joked about why he decided to not have children. He said:

I’ve got godchildren. Thank god I didn’t have children – can you imagine being George Michael’s son or daughter. I don’t think having Elton [John] as your dad would be as embarrassing as having George Michael as your father … It’s a resolute no, I’m 47.

On the other hand, he did say to BBC Radio 2 that:

I think if you have children maybe you deal with grief better, you understand the cycle better.

Because Michael dealt with a lot of death around him with loved ones in his life, grief and tragedy was a fear of his.

Including Kennedy, Michael is the godfather to two of Georgiou’s three sons and was even present for the birth of one. In an interview with The Sun, Georgiou stated:

When my son James was born in January 1992, Yog and I gave him his first bath.

4. Kennedy Posted a Tribute to Michael After His Death Online

Rest In Peace George I'm heartbroken we never got to speak again after so many years, I can't believe this has happened, please watch over me in heaven Godfather. Enjoy paradise I love you. ❤️

After Michael’s death, Kennedy posted a photo of him as a child with his godfather Michael. He then wrote this as a message with the pic:

Rest In Peace George I’m heartbroken we never got to speak again after so many years, I can’t believe this has happened, please watch over me in heaven God father. Enjoy paradise I love you.

Rest In Peace George, I can’t believe this has happened, watch over me in heaven God father. love you.

It appears that Kennedy had not spoken with Michael in a long while. Last year, Kennedy posted a birthday message via Twitter to Michael, with a similar statement about not having spoken with him for some time. Kennedy wrote:

Happy Birthday Uncle @GeorgeMichael I know it’s been a long time, your’e in my prayers. See u soon one day I hope.

5. Andros Georgiou and Michael Were Not On Speaking Terms In Recent Years

Perhaps the reason that Kennedy and Michael have not been in touch is because his father Georgiou has not been on speaking terms with Michael. In 2012, Georgiou spoke with The Sun about Michael’s life path, implying he could be engaging in a self-destructive lifestyle.

In 1998, the two had a disagreement, but The Sun reports that the tipping point was when Georgiou loaned a magazine a photo of Michael’s late mother Lesley. This greatly upset Michael, according to Georgiou.

When talking about his rift with Michael, Georgiou confessed:

The last thing I would ever want is for one of us to be standing over the other’s grave, wishing he had mended the nonsense that destroyed us.