Rogue One: A Star Wars Story is going to be a new experience for everyone in the audience, even the most die-hard Star Wars fans. It’s the first time we’re seeing a story that doesn’t concern the Skywalker family, even though Darth Vader does make an appearance. This is also the first stand-alone adventure, even if it does fit within the main Star Wars timeline. And even though it takes place just before A New Hope, director Gareth Edwards and his team made sure there were still plenty of new ships to impress.

Here’s a guide to some of the new ships we see in Rogue One.

Rogue One can have include new ships because we’re being taken to worlds we never saw in the Original Trilogy, including the “beach planet” Scarif. Since we never visited a world like that in the other films, it’s possible that the weapons the Empire deploys there were just not needed for worlds like Hoth or Endor.

Aside from being bigger, the difference between the AT-AT and the AT-ACT is its big orange door. The AT-ACTs are used on worlds where the Empire had major construction projects and each carried a cargo bed instead of troops. 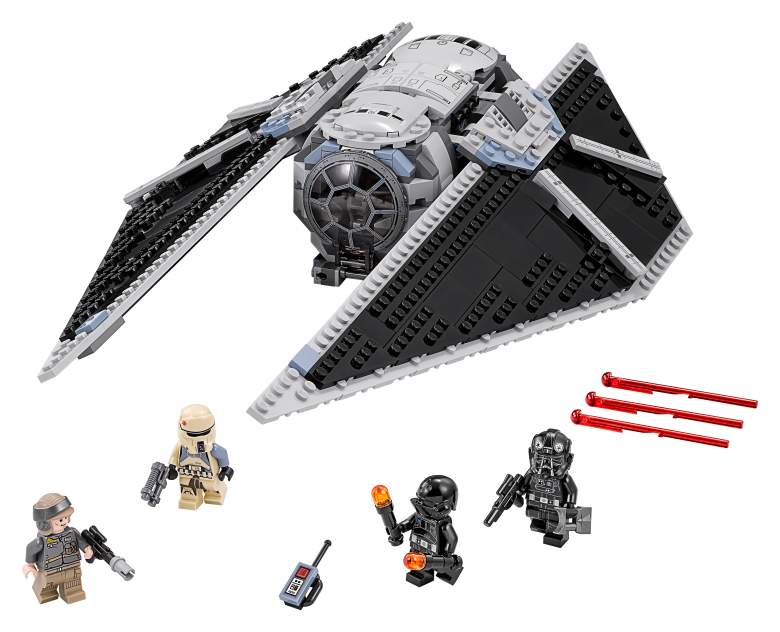 The TIE Striker hasn’t been visible in trailers yet, but here’s the LEGO set. (LEGO)

Surprisingly, the TIE Striker weren’t seen in any trailers. After seeing the movie, we know why – they are barely seen in the movie. We do see the TIE Strikers fighting the Rebels in the Scarif atmosphere, but we see far more traditional TIE Fighters than TIE Strikers in the film.

The TIE Strikers are very different from other Twin Ion Engine (TIE) Fighters seen in the Original Trilogy in that they were designed for in-atmosphere combat.

The horizontal wings help the TIE Striker be faster than the standard TIE Fighter. They also have a longer central pod that resembles a TIE Bomber‘s cockpit. Their wings also rise while in combat and can be lowered by the pilot to make the ship go faster.

Krennic’s Imperial Shuttle can be seen in the distance in this shot from one of the trailers. (Disney/YouTube trailer)

Every high-ranking Imperial officer gets his own shuttle, including Director Orson Krennic (Ben Mendelsohn in the film). On its face, the ship looks like Lambda-class T-4a shuttles used in the Original Trilogy. Krennic’s shuttle is the all-black Delta-class T-3c. The folding wings are much longer than the center wing and make the ship look like a bat.

The Imperial Combat Assault Tank would have been useful on Tatooine. They are also known as a “Hovertank” and are best used as a show of force inside cities. They are armed to the teeth with cannons.

Also, doesn’t this look awfully similar to the old Kenner Mini-Rig ships? Perhaps Edwards had some fond memories of those while growing up.

Unfortunately, the Rebels only get one new ship, as far as we know so far. The U-Wing is actually designed as a troop carrier, and not as a fighter like the X-Wing or A-Wing. Like many other fighters in the Star Wars universe, the U-Wing has S-foil wings (Remember the line, “Lock S-foils in attack position” in A New Hope?).

On the U-Wing, these wings swing out to the side. When they are folded in, the ship looks like a giant “U.”

“Our conceit is that the U-wing came from the same factory that was manufacturing X-wings,” John Knoll, the Oscar-winning special effects wizard who came up with the idea for Rogue One, told Entertainment Weekly. “It’s just like if you look at cars from one [automaker], you see design themes carried across multiple different product lines.”

Of course, even if it’s just a transport, the U-Wing is still armed with cannons in the front.

Of course, the Death Star isn’t a new ship. Also, some members of the audience might be grumbling, “Oh no, do we really have to watch a movie about destroying a big giant ship again?” However, Rogue One isn’t going to end with the Death Star destroyed, since that doesn’t happen until A New Hope. Instead, the film is about the Rebels who stole the plans and made sure they ended up in Princess Leia’s hands. X-Wings, which we saw in every movie from the Original Trilogy, will also play a key role in the new film.