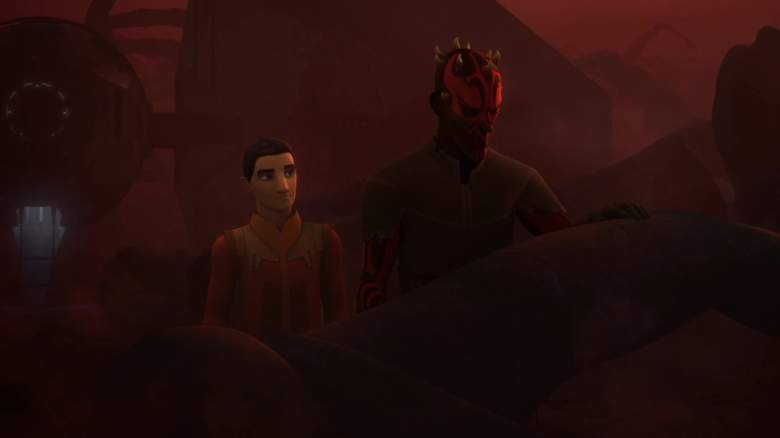 Finally, it is time to catch up with Darth Maul in Star Wars Rebels Season 3, Episode 10, “Visions and Voices.” We have not seen Maul since “The Holocrons of Fate.”

Since that episode, Phoenix Squadron has hopped from one problem to the next without many of them crossing over into the next episode. Sure, we’ve seen Grand Admiral Thrawn pop up repeatedly, but the Rebels usually get out of his grasp in 22 minutes.

“The Holocrons of Fate” ended with a major cliffhanger, as it appeared that Darth Maul learned from the Sith Holocron that Obi-Wan Kenobi might still be alive. In “Visions and Voices,” Ezra and Kanan catch up with Maul to see what he’s been up to.

Here’s a look at all the action in “Visions and Voices.”

The episode begins on Chopper Base, where Hera is trying to assign Ezra to a mission, but a mysterious voice is calling to him. It is clearly Maul’s voice. Hera reprimands Ezra for not paying attention, so he assures her that he’s focusing. But once she starts explaining, he hears Maul’s voice again. Now, it appears that Maul is right there on the base. Maul suddenly appears at Ezra’s shoulder and he collapses onto the holo table. Even Kanan can’t wake up Ezra.

After the title, Ezra wakes up suddenly in his champers. When he wakes up, all the members of the Ghost team are there. He tells them that he saw Maul at the briefing. Hera suggests that it might have been a Force vision, but Zeb thinks Ezra’s just been working too hard. Ezra thinks he feels fine now and can take the mission.

While the others leave, Hera and Kanan stay behind. “I’m thinking whatever Ezra went through with Maul, it’s not over yet,” Kanan tells Hera.

Meanwhile, Sabine is trying to prepare for the mission, but Ezra sees Maul again. He runs after him, while Sabine has Chopper get Kanan to see what’s going on. Ezra Force-pushes a man he thinks is Maul and is ready to kill him. Kanan holds him back, using the Force. It wasn’t Maul, just a member of the ground crew.

Hera thinks she should postpone the mission, but Kanan assures her that Ezra will be fine. He’s got a plan, after all and that convinces Hera that she can take her mission. Apparently, his plan is to have Ezra tracked by Sabine while he goes off with Maul.

Ezra and Kanan head over to visit Bendu, who we also haven’t seen in a long time. Ezra tells Bendu about his visions of Maul. Bendu reminds him of the dangers of bringing Jedi and Sith holocrons together. Ezra tells Bendu that the vision he had was incomplete because he let go before his or Maul’s questions were answered. The holocrons were then destroyed. “Well, that’s not good.”

Bendu then asks them what they want to do. “I want to stop seeing Maul,” Ezra says.

“Then don’t turn around,” Bendu replies.

Making a Deal With the Devil, Who Happens to be a Zabrak

Maul really is on Atollon and followed Ezra and Kanan to the spot where they spoke to Bendu. When they turn back to Bendu, he has disappeared. The two Jedi turn on their lightsabers, but Maul says he’s not there to fight. He’s there to talk to his apprentice. Maul is still convinced that Ezra will be his apprentice.

Maul explains that when Ezra let go of the holocrons, Maul ended up learning a bit of what Ezra wanted to know and Ezra learned information he wanted to know. This planted memories from Ezra in his head, including the location of Chopper Base. Ezra explains that he can’t make sense out of the visions he got, so Maul offers to help and get that information. Ezra pushes him away. “So you get your answers, but what do we get out of it?” Maul agrees to keep the location of the Rebel Base a secret, but Kanan says there’s no deal.

Maul chuckles. He’s put a beacon on the planet and if Kanan kills him, the beacon sends their location to the Empire. Maul reminds Ezra that he has the knowledge he wants – how to destroy the Sith. Ezra reluctantly agrees with Maul’s deal, which Kanan isn’t happy with. Kanan reminds Ezra that they could always build another base, but Ezra insists that this could be the last time they learn the secret to destroy the Sith. Kanan decides to trust Ezra on this. Maul and Ezra fly off the planet. Sabine and Kanan follow them, since Ezra is being tracked.

(Green) Smoke Gets In Your Eyes

Maul takes Ezra to his homeworld of Dathomir, where all the Nightsisters were wiped out by the Empire. (For much more on Dathomir, you should check out all the episodes of The Clone Wars that explained how Darth Maul was resurrected. All episodes of that series are available on Netflix.) Maul wants to use some of the old Nightsisters’ magic to merge their minds to find the answers they want. He tells Ezra to trust him and that he’ll only get the answers he “deserves.”

Inside the temple – which Maul has already filled with artifacts from his past – Maul orders Eara not to touch anything. The room is filled with Clone Wars Easter eggs, including a painting of Duchess Satine and a Mandalorian Darksaber. Meanwhile, Kanan and Sabine are approaching the planet.

Maul says he found a Nightsisters spell that will help them find what they need. The spell involves a potion, which Ezra has Maul drink first. As Ezra drinks, the spell begins to work. Both their eyes turn to green, with smoke coming out of their eyes. When the smoke clashes, Maul yells out, “Where is he?” “I want to know how to destroy the Sith,” Ezra says.

Ezra sees another person and vaguely recognizes him. After their vision breaks apart, Maul notes: “Of course. It ends were it began. A desert planet with twin suns.” Ezra is seeing the same thing and he can’t believe the man is alive.

I Ain’t Afraid of No Ghosts, Unless They’re Carrying Lightsabers

After the break, the spirits use Kanan and Sabine’s bodies to try to kill Maul and Ezra. Since they can’t defeat the spirits, they try to escape the temple. The spirits can’t leave the temple. Maul says that this is an opportunity for Ezra to take his rightful place as Maul’s apprentice. “That is never going to happen,” Ezra says.

“Forget the past!” a visibly frustrated Maul yells. “Forget your memories. Forget your attachments. Our futures converge on a planet with two suns. We can walk that path together as friends… as brothers.”

Ezra refuses to leave Sabine and Kanan, which disappoints Maul. He just decides to leave Ezra behind on Dathomir to figure out how to pull the spirits from Kanan and Sabine. Ezra thinks all he has to do is get them to leave the temple, but the spirit inside Sabine won’t make it easy. The spirit uses the Darksaber to fight Ezra. He uses the Force to push Sabine outside, forcing the spirit to leave her body. “You’ll never save your friends,” the spirit warns.

Sabine tells Ezra not to go back, but he has to in order to save Kanan. He finds Kanann sitting at the altar in the temple, with the spirit using the body to tell Ezra that they want flesh and blood to rebuild the Nightsisters. Ezra offers to pay the debt if they let Kanan go. “Perhaps if you prove to be stronger,” the spirit says, and begins fighting Ezra. When Ezra knocks Kanan down, he tells the spirit that he’s really the one it wants. The spirit leaves Kanan’s body and the spirits all tell Ezra that he has to pay the price.

“I’m gonna have to owe you one,” Ezra says as he uses the lightsaber and Darksaber to destroy the altar. He runs over to Kanan. “This is the last time we’re working with Maul,” Kanan says. Sabine goes into the temple to meet them.

Ezra tells Kanan that he has learned what he wanted to know. “The answer to my question of how to destroy the Sith is Obi-Wan Kenobi.”

However, the holocron didn’t tell him exactly where Obi-Wan is. Tatooine isn’t the only planet with two suns in the Star Wars universe. Maul obviously knows about Tatooine, since that’s where he first clashed with Qui-Gon Jinn in The Phantom Menace. (Yes, the prequels are still canon.)

While Ezra and Kanan leave, Sabine stays behind for a moment and notices the Darksaber. We see her take it and she runs after her friends.

While “Visions and Voices” puts Rebels back on course to further connect the prequels with the Original Trilogy, it would have been much better if this was earlier in the season. It was a direct follow-up to “The Holocrons of Fate” and there shouldn’t have been six episodes in-between. Rebels really is at its best when it is heavy on plot instead of just providing episodic, cartoony adventures where the Empire is foiled again by pesky rebels. (“And I would have gotten away with it too, if it weren’t for you meddling kids and that stupid droid!”)

The next episode of Rebels should continue building momentum because the crew goes to Geonosis, a planet whose importance can’t be overstated. Unfortunately, “Ghosts of Geonosis Part 1” doesn’t air until January 7. “The crew returns to Geonosis in search of a missing rebel team sent to investigate suspicious activity there, and are surprised by what they find,” reads the episode description. 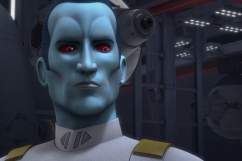