Hurley stars in the series as Queen Helena. The actress is perhaps best known for her roles in Austin Powers: International Man of Mystery, Bedazzled, and The Weight of Water. She has also produced a number of projects, including Extreme Measures and Mickey Blue Eyes. Hurley was born in Basingstoke, Hampshire, and met Hugh Grant in 1987 working on a production of Remando Al Viento. The two dated for thirteen years before splitting in 2000. Hurley has also established herself in the fashion industry-- she became a spokesmodel for Estée Lauder in 1995, and has been active in the company's Breast Cancer Awareness Campaign for a number of years. (Getty) 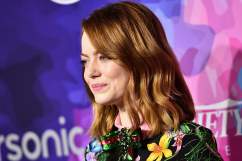 Read More
TV
Tonight is the Season 3 premiere of The Royals. Meet the cast of the E! show here.