In 1976, a movie called Star Wars began production under the direction of George Lucas. Although she was Hollywood royalty as the daughter of Debbie Reynolds and Eddie Fisher, Star Wars was just the second movie for Carrie Fisher, who was just 20 years old when the cameras started rolling.

Despite her connections, Fisher had to audition like many other actresses considered for the role. The only movie she made before Star Wars was 1975’s Shampoo, which certainly wasn’t a film that would prepare her for a science fiction movie.

In the audition tape, which you can see above, you can clearly see why Fisher was cast in the role. She has instant chemistry with Harrison Ford, who was already cast as Han Solo. She also projected a tough-as-nails personality, which would be needed to play Leia.

Getting the role wasn’t easy though. In 2011, Fisher told New York Live that she had to lose 10 pounds to get the role, even though she was 105 pounds at the time.

Even though 20th Century Fox didn’t think Star Wars would become the phenomenon it became, the project still attracted plenty of young Hollywood actors hoping for a big break. According to Premiere Magazine, Amy Irving was considered for the role, as was Irving’s Carrie co-star Nancy Allen. Terri Nunn, who later became the singer for Berlin, was a candidate.

In an interview with Empire Magazine, Jodie Foster said she was considered, but didn’t take the role. “But you know what? I only need to have one career. I only need to make the movies that I make and honestly, I don’t think I’m going to be on my deathbed going, like, “Damn! I didn’t do Star Wars!'” Foster said.

As Dave Itzkoff pointed out on Twitter, Fisher thought Foster had the role after Carrie director Brian De Palma told her that Foster was in the lead.

Carrie Fisher thought she'd lost the Princess Leia role to Jodie Foster. "I thought, well I'm not going to get to have lunch with monsters." pic.twitter.com/80CJOpm7Eo

Fisher went on to play Princess Leia in The Empire Strikes Back and Return of the Jedi. She returned to the role over 30 years later for The Force Awakens and already filmed Episode VIII. Fisher died on December 27 at age 60 after a heart attack on December 23. 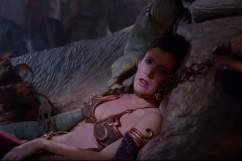 Carrie Fisher & The Slave Leia Costume: Her Best Quotes About it