Georgia-based rapper Yung Mazi has been shot at a Waffle House in Atlanta but is expected to survive.

Yung Mazi has been shot multiple times in the past, creating a legend of sorts around the rapper, who seems to keep escaping death.

Hotnewhiphop.com said Mazi tweeted, and then deleted, “God made me bulletproof.”

According to the site, the latest shooting occurred at about 4 a.m. Tuesday, December 27. “Yung Mazi walked into a popular Waffle House in Buckhead, Atlanta when a group of men, who were eating at a table, shot him in the arm,” the site said, adding that the rapper, whose real name was Jibril A., was taken to a hospital.

CBS News said that the rapper was shot in the chest and a description of the suspects was not immediately available. Mazi was about to order food when he was shot, said Atlanta 11.

Atlanta 11 said the shooter was already inside the restaurant with friends when Mazi walked in and was shot. His friends then gave him a ride to a hospital, and Mazi’s condition was good enough that he was able to talk to police. He was shot three times, said Atlanta 11.

In June, Yung Mazi gave an interview in which he claimed he had been shot 10 times in the past.

Mazi’s website says: “Mazi, who was raised a devout Muslim, had the misfortune of learning the hard way…Twice. ‘I just recently found out you’re not going to be able to balance the music and the streets. It’s either one or the other.'”

Several years ago, the website said, an “old beef with a hustler” reemerged and Mazi “was shot five times—one bullet hitting him in the head and leaving him temporarily brain damaged, almost ending his life.” As a result of that shooting, ” I had to learn how to read, write, and speak all over again,” Mazi wrote on his website.

On Twitter, some people pointed out how many times Yung Mazi has been shot.

Yung Mazi got a bounty on his head? Everybody shooting him

Seen Yung Mazi trending and automatically assumed that he got shot… 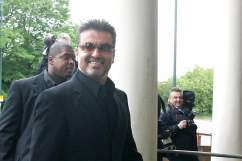