Meet the Members of 3 Doors Down

3 Doors Down, the rock group that had several hits in the early 2000s, will be performing at the "Make America Great Again! Welcome Celebration" on January 19, the day before Donald Trump is sworn in as President of the United States. The group will be joined by Toby Keith, The Piano Guys, Lee Greenwood, The Frontmen of Country and RaviDrums. Trump is also set to make remarks, along with actor Jon Voight.

3 Doors Down is best known for the hits "Kryptonite," "Loser" and "Be Like That" from their first album, 2000's The Better Life. Their second album, 2002's Away From The Sun, included "When I'm Gone" and "Here Without You." Their most recent album is 2016's Us And The Night, which was their first album since 2011.

Members of the band have come and gone, but singer Brad Arnold has remained the one constant. Guitarist Chris Henderson has also been with the band since 1998. Their original lead guitarist, Matt Roberts, died in August 2016.
Click through to meet the current members of the band. (Getty) 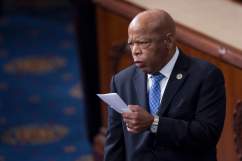 Read More
Donald Trump, Music, Three Doors Down
3 Doors Down, who had hits in the early 2000s with 'Kryptonite' and 'Loser,' is among the groups performing at Donald Trump's 'Make America Great Again! Welcome Celebration' concert on January 19.