Lifetime's newest movie is A Surrogate's Nightmare, continuing the network's obsession with surrogate plans going wrong. This time, we find a sister carrying her estranged younger sister's child and facing troubling demons that put the baby and herself in danger.

A Surrogate's Nightmare stars Poppy Montgomery as Angela, who reconnects with her younger sister, Shelley (Emily Tennant). She finds out that Shelley wants to have a family but cannot get pregnant, so she offers to be her sister's surrogate. Unfortunately, she has bad timing because her secret past is catching up with her. Shelley's marriage is also on the rocks and their secrets threaten to doom their plans.

Montgomery is an Australian actress who hit it big in the U.S. on Without a Trace from 2002 to 2009. After that show ended, she landed on Unforgettable, which came to an end in January 2016. In 2011, she starred as Harry Potter author J.K. Rowling in the made-for-TV biopic Magic Beyond Words: The J.K. Rowling Story. She has two children with her husband, Shawn Sanford.

Before the movie airs on January 2 at 8 p.m. ET, click through to meet the rest of the main cast. (Getty) 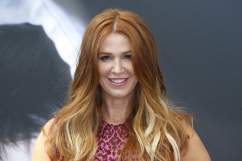 ‘A Surrogate’s Nightmare’: When Does Lifetime’s New Movie Debut?

Read More
Lifetime, TV
Meet the cast of Lifetime's newest movie, A Surrogate's Nightmare, a thriller starring Poppy Montgomery. Find out who else stars in the new film.