Donald Trump is gearing up to become President, which means that the boardroom is empty … Or is it? Arnold Schwarzenegger is ready to fire a bunch of celebrities on The New Celebrity Apprentice and tell everyone they’re “terminated.” Fans are anxious to see how Schwarzenegger handles the gig and what his infamous tagline will be when he hands some of the stars their pink slips. For all the details on what channel the show is on, what time the premiere airs and more, read on below. 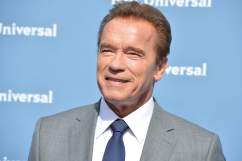