One of us is a Bachelorette contestant and the other has a nanny.

Corinne Olympios is the “villain” contestant on The Bachelor 2017 with Nick Viall this season and she has been leading with her sexuality, determined to keep Viall’s attention focused on her. Recently, Olympios popped up on Claudia Oshry’s Instagram account and in the photo, Olympios appears to be wearing an engagement ring on the designated “engagement finger.” You can check it out in the above Instagram pic, which was pointed out by Brides.com.

So, is Olympios the winner this season? Is she engaged to Nick Viall? The answer is “no.” Claudia Oshry, who was in the photo with Olympios told E! News:

[Corinne and I] were hanging out Friday night and, since I just got engaged, I was letting everyone try my ring on. We were having so much fun, taking photos, drinking – we didn’t even realize until every website was calling me and writing it up! No spoilers here, just a funny mixup!

When E! News asked Viall if he is currently engaged, this was his reply:

Possibly maybe with someone, possibly not.

Nick Viall is not allowed to confirm whether or not he found a winner, but Bachelor expert Reality Steve has reported that there is, indeed, a winner this season. If you do NOT want to know who the reported winner is this season, then STOP READING NOW.

Okay, let’s get into it. Corinne Olympios does end up in the final four, but the winner this season is reported to be contestant Vanessa Grimaldi, as per Reality Steve’s reports.

This means that, if Reality Steve is right, Olympios couldn’t possibly be the winner. Steve did warn, however, that social media and the tabloids could try to sway viewers’ opinions throughout the season in order to throw them off the scent of Grimaldi. Could this photo be just that? Or, could Olympios be engaged to someone else? Perhaps Olympios just happened to wear a ring on that finger that night … Reality Steve previously explained:

From this point forward, you will see promos, teasers, hear rumors, yada yada yada making you think all sorts of different things that aren’t the ending of Nick is engaged to Vanessa. It’s all just background noise. Pay no attention to it. The show and tabloids will do whatever they can in the next few months to make you think it’s an ending that’s different from what I reported.

For more information on Corinne Olympios: 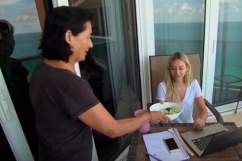 Read More
Nick Viall, Reality TV, The Bachelor, TV
Is Corinne Olympios engaged to The Bachelor star Nick Viall? Is she the winner? Did she win the show? Why does it look like she's wearing an engagement ring?