Tonight at the 2017 Golden Globes, Amy Adams has been nominated for Best Actress in a Drama Motion Picture for her work in the film Arrival. Adams will likely attend tonight's event with her husband, Darren Le Gallo, who she married on May 2, 2015. The couple met in acting class, and on May 15, 2010, they gave birth to their daughter, Aviana Olea Le Gallo. Speaking with Vanity Fair about the beginning of their relationship, Adams explains that she was friends with Le Gallo for a while before dating. "I had another boyfriend, and Darren was dating some girl I did scenes with him, and I liked him and thought he was really sweet..." One weekend, the couple acted in a short film, and got to know one another better. Adams says, "I got to know him outside of class... And I just found him to be such a genuine, caring person. And assertive! He demanded that we go out on a date." Since then, the couple has been together. Click through our gallery to learn more about Le Gallo and his relationship with Amy Adams. (Getty) 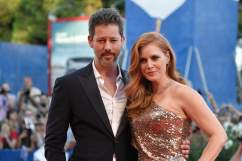 Read More
Amy Adams, Celebrities
Amy Adams married actor and artist Darren Le Gallo in 2015. Click through our gallery to check out pictures of Le Gallo, and to learn more about their marriage.