Heading back to ATL ✈️✈️✈️

Love & Hip Hop Atlanta star Kirk Frost has some new drama hitting him hard as alleged mistress Jasmine Washington has revealed a cheating scandal with Frost. According to Bossip, Washington has claimed that she and Frost had carried on a romantic relationship for approximately one year. During that time, Washington says that she became pregnant with his baby, Kannon. For more details on the scandal, Washington’s claims, Frost’s family and Washington’s child support case against Frost, read on below.

In the court documents (shown on the Bossip website) of the child support suit that Washington has filed, her income is listed at zero. The breakdown of her expenses reads:

Washington has requested that Frost pay $2,500 in child support, saying that, when they were together, she received an allowance and even a new car. 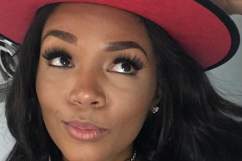 According to Bossip, Washington wants Frost to take a DNA test in order to prove that he is the father of her son Kannon. The site reports that Washington wishes for Frost to appear in front of a judge to explain why he is not paying child support.

3. Frost Is Married With Children

Frost and his wife Rasheeda star on Love & Hop Hop together and Frost is a father of five children. With wife Rasheeda, Frost has two sons – Ky and Karter. Rasheeda is a rapper, fashion designer and TV personality who was even previously in a group with Real Housewives of Atlanta star, music mogul Kandi Burruss.

4. Washington Says She and Frost Broke Up In October 2016

The Inquisitr reports that Washington has said she and Frost broke up in October 2016 and that that’s when her “allowance” from him stopped. Washington also claimed that Frost took back the car he had given her.

5. This Is Not the First Time Frost Has Been Involved In a Cheating Scandal

A few years ago, Bossip reports that Frost cheated on his wife Rasheeda and the drama was featured as a story line on Love & Hip Hop. Previously, in an interview with Bossip, Frost said that he was going through a lot of turmoil in his life when he cheated on his wife while she was pregnant. Frost explained:

I felt kind of left alone. You my friend and you not giving me … I need help right now and you’re like career, career, career. You were there a little bit but not as much as I needed you so I began to react in a way that I didn’t recognize, but again I never been put in that position before, so I just did things to piss her off.