Jimmy Fallon is the host of NBC's Tonight Show and he was also picked to host the 74th Annual Golden Globe Awards. The comedian will be losing a weekend to spend time with his family to host the awards show for the first time in his career. The 42-year-old Fallon is married to 49-year-old producer Nancy Juvonen. Fallon and Juvonen's daughters are Winnie Rose Fallon and Frances Cole Fallon, who were both born via surrogates. Winnie was born in 2013 and Frances was born the following year.

Fallon was really excited about finally becoming a parent, but he told Parents Magazine in May 2015 that he finds it weird that people always want to ask you about poop. "Normally I'd be blushing, but as a parent you just get used to it, and pooping is just another verb in your vocabulary," Fallon said. In 2015, Fallon also wrote a children's book with his own kids in mind called Your Baby's First Word Will Be DADA, which was published in June 2015.

Click through for photos of the adorable family that Fallon has shared on his Instagram page. (Instagram/Jimmy Fallon) 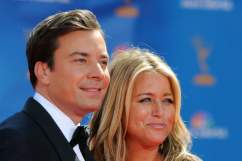