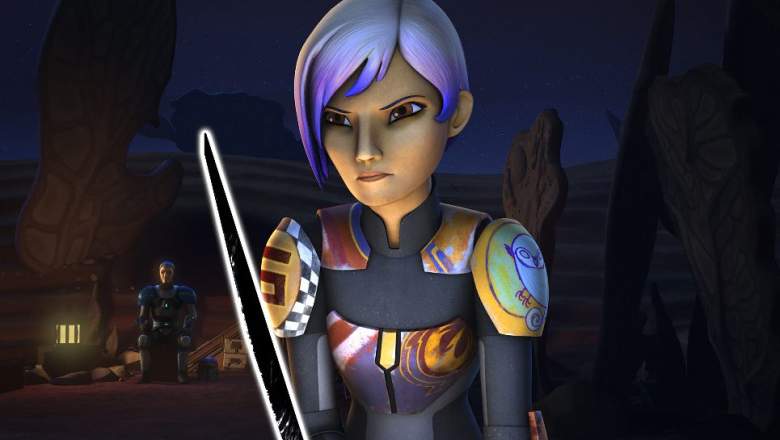 Sabine Wren is finally the focus of an episode of Star Wars Rebels with “Trials of the Darksaber.” Back in “Visions and Voices,” Sabine picked up a Darksaber that Darth Maul kept as a souvenir from his time on Mandalore. Now, Ezra and Kanan will help her learn how to use it and embrace her inner Mandalorian.

Here’s a look at the action in “Trials of the Darksaber.” 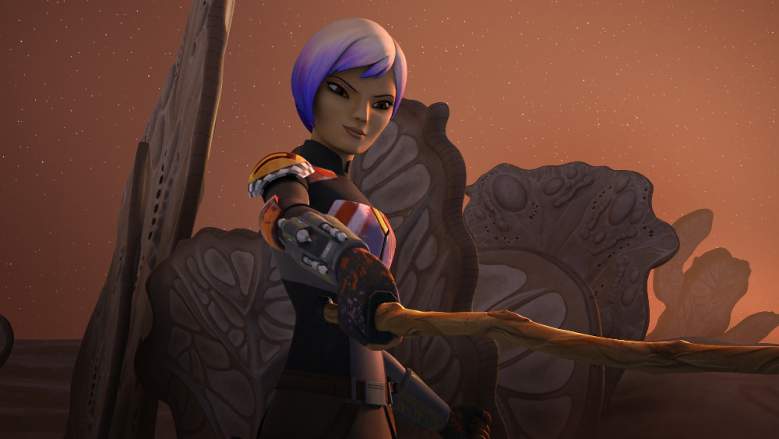 The episode starts on Chopper Base, with Rau walking past Sabine and into the Ghost to meet with Kanan. He shows Rau the Darksaber, and Rau explains the history behind it. The Darksaber was used by the leader of House Vizsla and the group Death Watch.

According to legend, the Darksaber was developed thousands of years ago when Tarre Vizsla became the first Mandalorian Jedi. When Tarre died, the Jedi kept the Darksaber in the Jedi Temple on Coruscant. But House Vizsla members stole it back to use to take control of Mandalore. At one point, House Vizsla ruled the entire planet. (By the way, this story is told using some neat 2D animation that would be fun to see more of.)

Rau explains that Sabine should have been excited to find the Darksaber, since she could use it to reunite House Vizsla. However, Kanan explains that Sabine gave it to him for safekeeping and hasn’t talked about it since. Kanan also realizes that Rau is hinting at the development of an army. “Yes, with Sabine leading it,” Rau says.

Do Or Do Not. There Is No Try 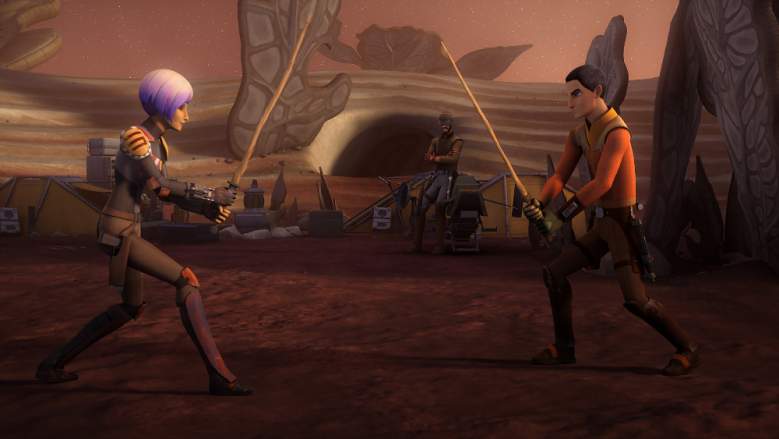 After the title and break, we find Sabine silently sitting in her quarters. Chopper comes in to lead her to the main meeting room on the Ghost. She finds everyone there, including Rau. Right away, she refuses to use the Darksaber because of the trouble it’s caused her family in the past, especially after Maul himself used it. But Rau insists that she could use it for good – to bring Mandalore together instead of tearing it apart as Maul did. (Again, this is all referencing action in The Clone Wars series, which is available on Netflix for a better understanding of how Darth Maul came back to life and briefly controlled Mandalore.)

Kanan surprisingly wants Sabine to hear what Rau has to say. Ezra suggests she learn how to use the Darksaber, but Rau says the symbolism of it is more important than her ability to use it as a weapon. Sabine insists that her real family isn’t on Mandalore, but her friends on the Ghost. In another twist though, Hera tells Sabine that they do need help from the Mandalorians. If Sabine could rally an army of Mandalorians to help the Rebels attack Lothal, Hera has to ask Sabine to do it. Sabine agrees to do it, and to let Kanan teach her how to use the lightsaber.

Ezra and Kanan take Sabine out to a remote area on Atollon to train with the lightsaber. First, Kanan tests Sabine with a stick. She insists that she knows how to use a sword, but Kanan makes her look like a fool in front of Ezra. “That might work on a Stormtrooper, but not me,” Kanan says. “Every mistake is a limb lost,” he tells her. (The Skywalker family knows a thing or two about lost limbs.) After that, Kanan has Ezra talk Sabine through the lightsaber forms.

After another commercial break, we learn through Kanan’s conversation with Hera over a commlink that Ezra has been taking Sabine through the forms for two days already. Hera thinks Kanan is using wooden training sabers because Sabine can’t use the Force. Kanan explains that the Force resides in all living things, but Sabine’s mind is just blocked to it. She needs to open up her mind and be patient.

While Ezra and Sabine continue their swordplay, Rau drops off some supplies. Ezra beats Sabine again, but he has to help unload the supplies while Rau talks with Sabine. He presents her with Mandaloriaan vambraces, which are filled with special tools like a grapling line and paralyzing darts. All the tools are specifically designed to stop Jedi. While fighting Ezra, she uses a sound blast to knock Ezra on his feet.

Kanan is really not happy with Sabine using tricks. Sabine throws a rope to wrap up Kanan, but he cuts it with his lightsaber. “History lesson: The Jedi won the war with Mandalore,” Kanan says. (He’s apparently referring to an ancient war between the Jedi and the Mandalorians. While there were Mandalorian Wars in the “Legends” Expanded Universe, details about this in the new canon haven’t been revealed.) “These tricks will amount to something, maybe save you from time to time, but they won’t keep you alive in the long run. Only training and discipline will do that.” 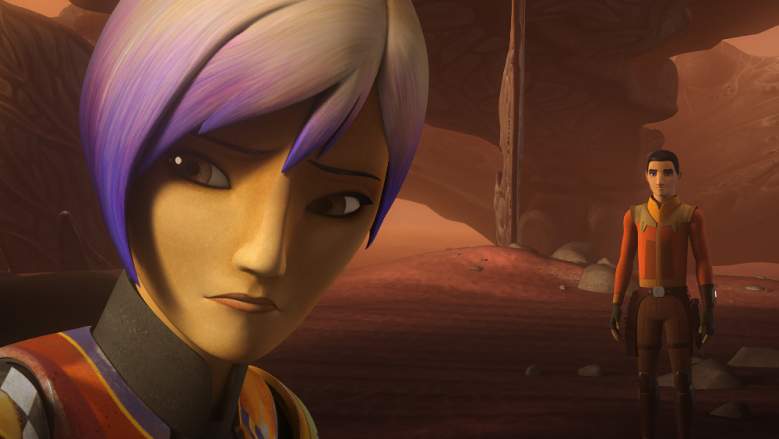 “The only thing I’m learning is that Ezra must be really gifted to learn from a lousy teacher like you,” Sabine snaps back as she throws her stick to the ground. She heads over to a rock to be by herself for a moment, but Ezra interrupts her alone time. “Believe me, Kanan’s not the best teacher to have, but he means well,” Ezra tells her.

Sabine admits to what’s really troubling her: she doesn’t want the responsibility that goes with carrying the Darksaber. Plus, she’s a disgrace to her family for leaving Mandalore behind. Sabine insists that Ezra has no idea what she’s going through and the burden she would face if she agrees to lead her people. “At least you have parents to go back to,” Ezra tells her as he walks away. Sabine kicks a rock before walking away herself. It turns out that the rock was actually Bendu’s foot. He wakes up and watches them leave.

Back at his makeshift training center, Kanan is talking to Hera again. She’s trying her best to help Kanan’s confidence in training Sabine, but Kanan says it’s much harder than training Ezra. He was eager to learn, but Sabine… not so much. Hera suggests that Sabine finally be allowed to use the Darksaber, but Kanan says Sabine needs to find a balance within herself before she can use a lightsaber. Hera says that using the Darksaber will help Sabine come to terms with who she is and can gain confidence in her own abilities. Pretending to learn with a wooden sword isn’t going to do her any good.

Time Is a Luxury 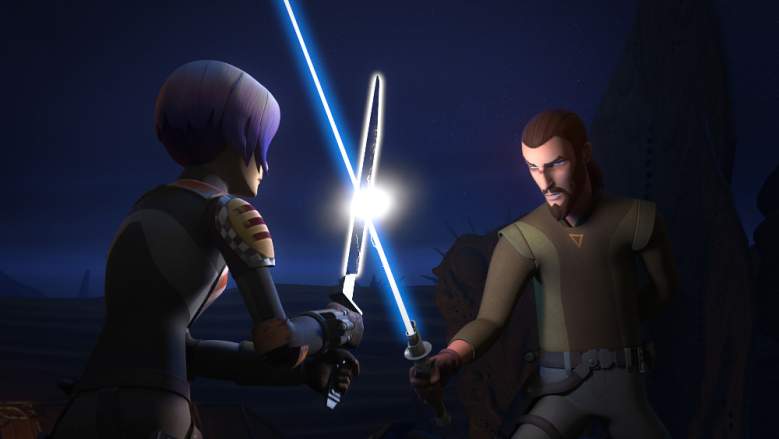 After another break, it’s night on Atollon and Sabine still hasn’t returned to the training area. Ezra has a chat with Rau, and Ezra says he thinks Kanan is trying to teach Sabine everything all at once. “Time is a luxury, one the galaxy seems to be running out of,” Rau says.

At that moment, Sabine returns and she looks ready to train. Kanan says he owes her an apology, and she says she does as well. Kanan then presents her with the Darksaber. At first, Sabine thinks she still needs more practice, but Kanan reminds her that it belongs to her.

Sabine turns it on. It’s heavier than she thought. “Energy constantly flows through the crystal,” Kanan explains. “You’re not fighting with a simple blade as much as you are directing a current of power. Your thoughts, your actions, they become energy. They flow through the crystal as well and become a part of the blade.”

The two clash their lightsabers and Kanan teaches her as he should have from the start. With each swing, Kanan pushes her to move faster. As she connects with the saber, it becomes lighter. “But you cannot rely solely on the blade. You must use all your skills together,” he tells her.

After knocking her to the ground again, Kanan tells Sabine, “You’re not fighting me. You’re fighting yourself… and losing.”

He continues pushing her, reminding her that her people hate her for leaving the Empire and leaving her family. But it’s not true, she insists. “The truth is that I left to save everyone,” she tells Kanan, as their sabers crackle. “My mother, my father, my brother! Everything I did was for family, for Mandalore! I built weapons – terrible weapons – but the Empire used them on Mandalore.”

Sabine feels guilt for creating weapons that made Mandalorians fear for their lives. When she decided to speak out, her family didn’t stand by her side. They abandoned her and sided with the Empire. “The Empire wanted to destroy worlds and they did. They destroyed mine,” Sabien says.

Kanan tells her that it’s up to her to help her family escape the grip of the Empire. Rau interrupts and tells her that he’ll follow her, as will Ezra.

“You’ve come a long way in a very short time. Where you go from here is up to you,” Kanan tells Sabine. “But know, this family will stand behind you no matter what you choose.”

With the three men kneeling before her, Sabine grips the Darksaber, ready to embrace her future.

Now that was a great 22 minutes of Rebels, especially after the disappointing “Warhead.” We know much more about Sabine’s past and we even got a lesson on how lightsabers work. “Trials of the Darksaber” brought more dimension to Sabine’s character and it’s a shame that this wasn’t a two-parter. The single episode had to accomplish too much and even Ezra noted that Sabine’s training was moving too fast. If only episodes weren’t squandered with one-shot stories like “Warhead” and “Iron Squadron.”

The next episode of Rebels is “Legacy of Mandalore,” which doesn’t air until February 18. “Hoping to get her family to help the rebels, Sabine returns home with Kanan and Ezra, and finds herself embroiled in her family’s power struggle for Mandalore,” reads the synopsis. So it looks like Rebels will spend a chunk of time back on Mandalore for the rest of its third season. 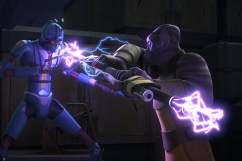 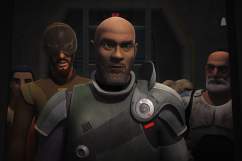