James Dewitt Yancey, aka J Dilla and Jay Dee, was one of the most iconic hip-hop beat-makers of all time. He would’ve turned 43 years old today, February 7, 2017. Unfortunately, the Detroit producer died in 2006 of the blood disease thrombotic thrombocytopenic purpura. But fans and colleagues alike are taking to Twitter today to celebrate the Donuts creator’s life and music.

The official social media accounts for the late hip-hop producer have also been sharing a number of images of Dilla, including this one:

Happy Earth & Born Day Jay!!!!??? We salute you on this day, born Feb. 07, 1974.. James Dewitt Yancey. Thank you for sharing your great talents and gifts of music with this world…You truly put in the work fam!..unmatched and truly missed… 11 years later, still inspiring, and having people make scrooge faces..lol .?? ? Incredible Work Ethic ??? We are forever grateful.. 43rd Salute to a Legend!! #ThankYouJayDee ?✊?????? "Without this extraordinary woman, giving birth, nurturing and caring for our beloved brother James from the cradle to the grave. Ask yourself this question, how could any of this be possible? We salute you on this day as well Madukes!" #WeLoveYouMaDukes #Salute #JayDee

Happy Birthday J Dilla, your spirit lives on with every beatmaker.

How much do I love J DILLA? Well, Purple is my alarm clock, and Over The Breaks is my ring tone. I turn it up every day! ??? #flavourites

To non stop chill vibes. Happy birthday to one of the greatests to ever do it #JDilla ??? pic.twitter.com/x9GT7s7Fo2

Dilla fans are countless at this point, especially considering his influence on rap. Hip-hop artists have rarely stayed quiet about the importance of Dilla’s music, so it’s no surprise to see them sharing some love for him. Head over to the official J Dilla Twitter account to see a number of retweets from artists that wished him a happy birthday today.

We aren’t through celebrating the producer just yet. The 11th annual J Dilla tribute, Donuts Are Forever, is taking place on February 19 at Brooklyn Bowl in New York City. Tickets are on sale now.

This show could feature previously unheard and/or unreleased tracks from Dilla, according to Brooklyn Vegan. Here’s his previously unreleased song, “Ghetto Wishing,” which was unearthed right before what would’ve been his 43rd birthday. 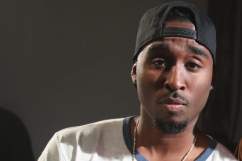 ‘All Eyez on Me,’ Tupac Shakur Movie: 5 Fast Facts You Need to Know