The appeal of Bruno Mars is undeniable. He’s charismatic, talented, and deeply indebted to the icons of the past– in other words, the prototypical pop star. His songs typically take a sweet, sincere approach to love that’s relatable for all audiences, and chances are, if you’ve owned a radio at some point in the last decade, you’ve run into earworm smashes like “Just The Way You Are”, “Treasure”, and “Uptown Funk.”

Mars (born Peter Gene Hernandez) has continued this success with his latest album 24K Magic and his upcoming world tour. He will also perform at the Grammy Awards tonight, where he will honor his musical idol, Prince, by playing with the late singer’s side project, The Time. Given this packed schedule, we thought now was the perfect time to take a look at the man behind the funk. Here are 5 fast facts you need to know about Bruno Mars.

1. He Grew Up In A Family of Musicians

Born in Honolulu, Hawaii, Mars and his five siblings were exposed to wide array of music at an early age: reggae, rock, hip-hop, classical, and R&B. This exposure was compounded by the lifestyles of their parents, as Mars’ mother Bernadette San Pedro Bayot was a singer and his father Peter Hernandez, Sr. was a rock musician. “Everybody in my family sings,” says Mars in the video above, “everyone plays instruments… I’ve just been surrounded by it.”

From the age of four, Mars performed on stage with his family’s band, The Little Notes. But it was his impersonation of Elvis Presley that first got the young singer recognized, as his “Little Elvis” routine landed him a halftime show appearance at the 1990 Aloha Bowl and a cameo in the 1992 comedy Honeymoon in Vegas (check it out here).

The nickname “Bruno” comes from his father, who thought his son resembled the professional wrestler Bruno Sammartino.

2. He Has Many Musical Influences

This should come as no surprise. Bruno Mars’ career has been a mosaic of musical styles, whether he’s channeling The Police (“Locked Out Of Heaven”), Michael Jackson (“Moonshine”), Bobby Brown (“Finesse”), or Billy Joel (“When I Was Your Man”). Mars cites his father’s doo-wop collection as a key influence early on, as it provided a foundation for him to approach all other genres.

“When I was younger, I [was listening] to nothing but Keith Sweat, Jodeci, R. Kelly,” Mars told Vibe in 2010, “I swore I was gonna be in an R&B group like Jodeci. Of course, 1950s rock-and-roll… everything on Motown. Then in high school, I got into classic rock… like Zeppelin, The Beatles.” Additional artists that have inspired Mars over the years includes Little Richard, The Roots, Freddie Mercury, Stevie Wonder, and Carlos Santana.

The “Billionaire” singer is on his way to becoming one in real life, as The Richest reports Bruno Mars to have a net worth of $105 million. And while the combined earnings of albums and touring would be more than enough for most, Mars is also sharp when it comes to business ventures. He purchased a Laurel Canyon home for $3.24 million in 2012, before selling it to Emmy-winning producer Rob Cohen for $3.3 million in 2015– giving him a profit of roughly $100, 000.

Elsewhere, Mars has invested stock in the digital music interface Chromatik and NJOY, the world’s largest electronic cigarette company. He signed on as an investor in 2012, co-signing the product as it helped him kick his smoking habit at his mother’s request. “I believe in the product and the company’s mission,” Mars said in a press release. The singer also launched his own liquor brand, SelvaRey Rum, along with partners Seth Gold and Robert Herzing in 2014. The following year, SelvaRey expanded distribution to the East Coast and Hawaii.

4. He Has Won Four Grammy Awards

Where most musicians take a few years to find their stride, Mars hit the ground running with his 2010 debut Doo-Wops & Hooligans. Off the strength of the hit singles “Grenade” and “The Lazy Song”, the album received an impressive seven nominations, including Album of the Year and Best Pop Vocal Album, ultimately winning Best Male Pop Vocal Performance for “Just The Way You Are.” Sophomore project Unorthodox Jukebox (2012) received an additional four nominations, this time winning for Best Pop Vocal Album.

But it is Mars’ most iconic song, the Mark Ronson collaboration “Uptown Funk,” that’s also proven to be his most awarded. The smash hit took both Record of the Year and Best Pop Duo/Group Performance at the 2016 Grammy Awards. Mars’ current album, 24K Magic, is not eligible for the Grammys this year because it missed the release deadline. It will qualify for the 2018 Grammy Awards.

Mars has also been nominated as part of the production team The Smeezingtons (along with Philip Lawrence and Ari Levine), who’ve written “F**k You!” for CeeLo Green and “All I Ask” for Adele.

Since his debut in 2010, Mars has attained six number-one singles on the Billboard 100. To put this achievement in perspective, that makes him the fastest male artist to do so since the man he grew up impersonating: Elvis Presley. “Just The Way You Are” and “Grenade” are still two of the biggest digital singles of all time according to IFPI, while the addition of “Locked Out Of Heaven” and ‘When I Was Your Man” makes Mars the first male artist ever to have four singles sell over 4 million copies.

With this tremendous success, it’s easy to understand how Mars has sold over 100 million albums worldwide. At 31 years-old, he has already surpassed musical legends like David Bowie, Paul McCartney, Bob Dylan, and Prince. It doesn’t look as though things are slowing down, either, as 24K Magic has spent five non-consecutive weeks atop the US R&B/Hip-Hop Albums Chart, and sold 462, 000 copies as of January first. It’s anyone’s guess as to where Mars will end up by the end of his career. 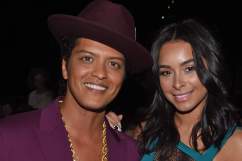 Who Is Bruno Mars Dating?