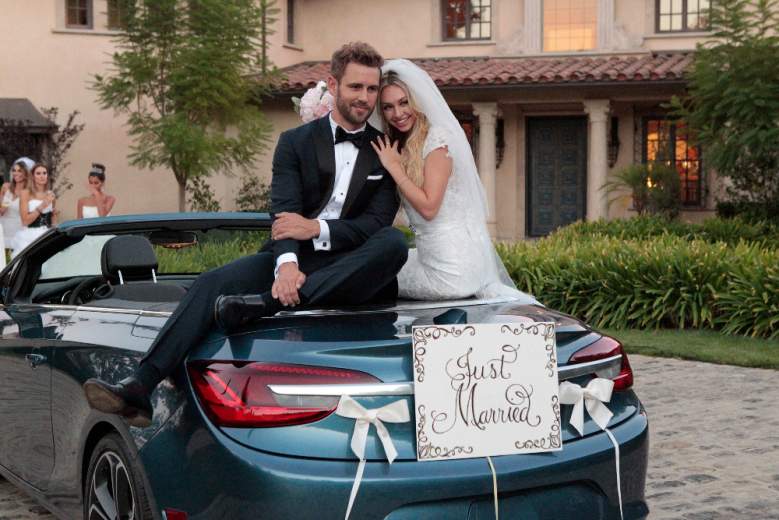 Corinne Olympios has been the villain this season on The Bachelor and tonight, Olympios makes an attempt at getting Nick Viall into bed. She tells the cameras that her vagina is “platinum” and that she is determined to be the front-runner in Viall’s eyes. She then visits him at his hotel room and eventually leads him into the bedroom area, shutting the door. According to Reality Steve, Olympios does not succeed in her seduction that night. Reality Steve previously revealed:

Corinne sneaks over to Nick’s room to, you know, “talk” to him. And by that, I mean try and have sex with him. This was featured prominently in the season preview. You know, where she talks about a “heart of gold, but my vageen is platinum.” Nice. I’m sure mommy and daddy will be proud. That season preview sure makes it look like she had sex with him. Didn’t happen. He ends up sending her back to the hotel.

So, it looks like Olympios does not get lucky. In an interview with Us Weekly, show host Chris Harrison talked about how production feels about contestants sneaking out to visit the star. Harrison explained:

What I tell them (the contestants) in the beginning is, there are no rules. What you do, whatever you would like to do, do it. You may not get time with him every week because there’s so many women that you may not get dates, so when you find time, if you find time, however you want to find time, do it. And they have to understand, as does Nick, that there are ramifications for your actions. Just sneaking out to spend time may not be a good thing, necessarily. You have to take into consideration how he’s feeling, where his head is, is he going to take that as a good thing, or is it just too aggressive and too much.

Harrison also dished on his thoughts about Olympios, saying:

She’s not afraid to go for it, and I think he finds that very appealing. I think it’s refreshing that, say what you will about her, she’s open and honest, and what you see is what you get, and at least you don’t have to wonder, like you do with some of the other girls, how she’s feeling or where she stands.

We’re guessing that Viall turns Olympios down because he doesn’t want to relive his past mistakes. He already had one contestant (Liz Sandoz), who he previously had sex with, and he had to explain himself to the other women. Plus, when he had sex with Kaitly Bristowe on The Bachelorette, it caused a ton of drama. He probably didn’t want to make more of a mess for himself than he had to already.

‘The Bachelor’ 2017 Contestants: The Final Four of Season 21

Read More
Reality TV, The Bachelor, TV
Fans are wondering ... Does Nick Viall have sex with contestant Corinne Olympios on The Bachelor tonight?