Since rising to fame in 2009, Drake has seen tremendous success. He is rap’s reigning star, the best-selling musical artist of 2016, and the recipient of three Grammy Awards, including two this year for Best/Sung Collaboration and Best Rap Song. He is also prepping the release of his latest project, More Life, later this month. But despite this busy schedule, Drake does have his fun outside of the studio, and as tabloids have shown on numerous occasions, most of it have to do with his love life.

Over the years, Drake has been linked to a number of female celebrities, from actresses and athletes to models and fellow musicians. He’s developed a reputation as something of a ladies’ man in the media, though in a case of life imitating the rapper’s lovelorn, melancholy art, his relationships rarely last very long.

Here are five of the most famous women that Drake has dated.

Drake opened up about his relationship with Tyra Banks on a 2013 episode of Ellen. “I went on a date with her one time”, he revealed, “It was just one date.” The rapper didn’t stop there, however, and proceeded to discuss the particulars of his date with the former model: “We went to Disneyland in disguise, actually, which was fun.”

The public announcement caught Banks off guard, as she discussed on an episode of Steve Harvey. “I’m watching Ellen and I can’t believe it,” she said, before jokingly challenging Drake to a rap battle: “I have words for you… I’m going to freestyle what I got to say to you, Mr. Aubrey.” The couple have remained friends in the years since, and Banks again played the part of Drake’s girlfriend for the 2016 music video “Childs Play.” In it, Banks gets payback for the Disneyland crack by mashing cheesecake in Drake’s face. Check out the video below.

Drake and Serena Williams have been friends since 2011, and the rapper even references her in the 2013 single “Worst Behavior.” But it wasn’t until 2015 that their relationship actually began to heat up. The “One Dance” rapper was suddenly courtside at all of Williams’ tennis matches, and according to TMZ, the two were caught kissing in a restaurant in Cincinnati. The couple never publicly admitted to their romance, but it was obvious to everyone else around them that it was the real deal. According to Hollywood Life, Drake’s mother Sandi Graham went as far as to say that Williams is “the one” for her son.

Unfortunately, the couple took a hit in September of that year, as Williams lost the U.S. Open and fans began blaming Drake for the loss. The sentiment even became a trending hashtag on Twitter: #BlameDrake. Within a month, the public scrutiny separated the two, and Williams officially began dating Reddit co-founder (and current fiancé) Alexis Ohanian.

Nicki Minaj and Drake perform on the Pink Friday Tour at Roseland on August 14, 2012. (Photo by Larry Busacca/Getty)

While the’ve never confirmed their romance publicly, we take the fact that these two got Twitter-married as reason enough for Nicki Minaj to make the list. There’s always been a sexual tension between the Young Money label mates, from their raunchy performance at the Thanksgiving Thank You Concert in 2010 to the constant marriage references peppered into songs like “Miss Me” and  “Moment 4 Life.” Drake has also been vocal about his love for Minaj, telling The Daily Beast, “If there’s any woman in my life that’s the ideal woman for me, it’s Nicki.”

Drake and Minaj remained close until 2013, when label politics caused a falling out in their relationship. The “Only” rapper’s romance with Meek Mill, who started a high profile beef with Drake in 2016, didn’t help matters. But as of late, a newly single Minaj has mended fences with her former Twitter husband, and the two have been seen working on new material in the studio. The “will they/won’t they” of this relationship seems far from over. Check out their chemistry at the end of the “Anaconda” video below.

Jennifer Lopez at the Grammy Awards on February 12, 2017 in Los Angeles, California. (Photo by Christopher Polk/Getty)

As the most recent romance on this list, Drake’s tryst with Jennifer Lopez has also proven his most unexpected. Rumors of the two started last December, with an intimate Instagram post and some very obvious PDA being the main culprits. According to NYMag, Lopez even turned down a $1 million gig to spend New Year’s Eve with Drake. When asked about their status in January, Lopez played it down, simply saying that they’ve done a song together and that it might be “on his next album.”

But almost as quickly as it had started, Drake and Lopez’s relationship fizzled out. Sources told Entertainment Tonight that things had stalled because of their wildly busy work schedules. Lopez opened up with Ryan Seacrest at the Grammy Awards on Sunday, saying that Drake is “amazing” and that she still has “so much love for him.” The rapper has yet to comment on the relationship.

Drake and Rihanna at the MTV Music Video Awards on August 28, 2016 in New York City. (Photo by Jason Kempin/Getty)

Rihanna is, without a doubt, the most complex and lingering romance that Drake has had as a celebrity. The two have been on-and-off more times than Cheers‘ Sam and Diane, with countless reports of their bond outlasting other relationships. The rapper first linked up with Rihanna in 2009, taking her on a date to a bowling alley that he later mentions in the song “Fireworks.” In an interview with XXL, Drake confirmed that the two had definitely dated for a brief time but that things were “over” between them.

Since then, not a year has passed that doesn’t include Drake-Rihanna dating rumors. They often collaborate on music, with the hit singles “What’s My Name?“, “Take Care“, “Too Good” and their accompanying videos furthering the idea that these two are still smitten. That’s not even getting into their matching tattoos, Drake’s billboard dedication, and the fact that they actually shared “I love you’s” at last year’s VMAs. Watch their Grammy-nominated duet “Work” below. 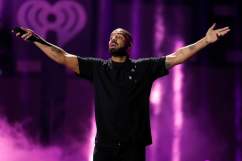