It’s been a busy Valentine’s Day for Future, as he’s announced his upcoming world tour and a new album set to come out on February 17th. He’s also hopped on the Maroon 5 single “Cold“. Now, seemingly out of the blue, the Atlanta rapper has taken to social media to address all the “hurt and heartbreak” that he’s caused others in the past.

Future posted a wistful photo of himself on Instagram, his first since quitting the service at the beginning of the year, with a caption that offers an unexpected window into his life. “The March Madness” rapper writes: “With all due respect, Im asking you to be loving, patient, and kind enough to understand my creativity is to heal wounds, not make new ones. However, the greater the risk, the greater the reward. Especially when you have great intentions for every individual that has played a major role in your life experiences.”

He goes on to admit that he’s aware of his flaws, saying “Now bare with me through my trials and tribulations, my wrong’s and my rights. Find time to forgive me for any hurt or heartbreak I may have caused loving selfishly!” the “March Madness” rapper continues by saying “I’m not perfect, no man walking this earth is. I’m at a place in life where I wanna make my weaknesses my strengths to become a better person than I was yesterday.”

It’s unclear what spawned this outpour of emotion, but many attribute it up to Future’s nasty breakup with R&B singer Ciara, as well as the subsequent custody battle of their child Zahir Wilburn, Jr. Future’s self-titled album is now available to stream here. 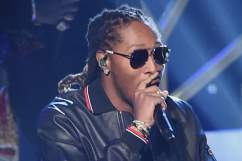