The Carbonaro Effect returns with an all new season of magic, hi-jinks, and even some celebrity appearances. The show airs at 10 p.m. ET/PT and 9 p.m. CT on Tru TV and the official season synopsis reads:

Magician by trade but trickster by heart Michael Carbonaro brings his unexpected tricks that will astound and amuse audiences for the third season of The Carbonaro Effect. This season, Michael heads to Chicago and disguises himself in various roles to bring his unique brand of enticing magic to unsuspecting people, blowing minds and leaving viewers wanting more.

We got a chance to catch up with magician Michael Carbonaro to chat about the new season as well as the live tour he’s carrying out as we speak. Check out what Carbonaro had to say below.

When it comes to his live shows, Carbonaro said he’s having, “So much fun. This is a blast. I’m loving getting to go out and do live magic shows. I love the live crowds.” And, as far as audience participation goes, he stated that, “A lot of people come up to help out in the show.” Carbonaro previously put on shows in 35 cities before and he’s doing 35 right now. His schedule is jam-packed.

Carbonaro has described his live shows as something to watch with the whole family, with a comfortable and fun energy.

As far as his reality show goes, he says this season is really cool and that he is always trying to challenge himself. He revealed that:

Teleport is a trick that people really like. So, what if I could make someone think that THEY teleported from one place to another?

Carbonaro was able to pull it off and did it in a Chicago train station. He enjoyed watching his subject unwind, wrestling with reality and sweating it out.

The most fun for him is the fun of knowing that we can believe in these outrageous things, as people can be “beautifully gullible.” It’s fun to watch people get confused and “go through a moment.” What’s the most fun for Carbonaro, however, is trying to challenge himself and this season, he decided to make someone think that a person can turn into a chicken. He says he’s also toyed with someone thinking they are invisible. Michael Carbonaro lives for thinking of an idea that seems impossible and trying to create a way to make it possible.

He says he has a great team of people to bounce ideas back and forth with and they are also magicians.

This season on the show, Carbonaro incorporates a little bit of disguises, but these are minor changes. In addition, other characters are sometimes brought into play. For example, Carbonaro brings on some celebrity guests.

In the future, Carbonaro says he would love to play a trick on celebrity Nick Jonas if he could. We’ll have to see if that happens one day …

Don’t forget to tune in. And, for more information on Carbonaro’s tour, click here.

Getting ready for you tonight Minneapolis!! State Theater! MichaelCarbonaro.com Thanks for the pic @_itsLJ_ 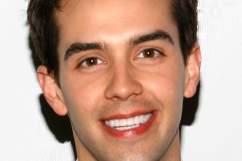 Read More
Reality TV, TV
Michael Carbonaro gives the rundown on The Carbonaro Effect as well as his live shows on tour.