Nick Cannon is a man of many talents, from actor and rapper to record producer and TV personality. He’s starred in films like Drumline (2002), Love Don’t Cost A Thing (2003), and Roll Bounce (2005), while also hosting Wild ‘N Out, The Nick Cannon Show, and until very recently, the NBC reality series America’s Got Talent. On Monday, Cannon announced that he will be leaving the show after network executives threatened to fire him over a racially charged joke made in his standup special Sit Down, Don’t Shoot.

In the wake of this resignation, Cannon’s busy schedule and his prior marriage to pop star Mariah Carey have caused many to wonder: how much money does he make? According to Bankrate, Nick Cannon has an estimated net worth of $50 million.

Read on to learn more about Cannon’s net worth and how he spends his money.

Cannon and Mariah Carey wed within two months of their first date in 2008, before making their relationship public. Carey gave birth to the couple’s fraternal twins, Morocco and Monroe, in 2012. During this time, Cannon’s net worth of $20 million was greatly elevated, as Carey’s success in the music industry tallied up to an estimated net worth of $520 million. The couple also purchased a three-acre property in 2009 for $10 million, before selling it in 2014, when rumors of their separation began to arise.

Cannon filed for divorce the following year. According to TMZ, the couple agreed on a settlement for their divorce, with Cannon being called upon to put $5,000 per month in a trust fund for Morocco and Monroe. Carey, on the other hand, did not have to add to the trust, but instead hand over the family’s 2012 Ferrari (valued at $188,000) and cover lodging costs whenever Cannon comes to visit the children.

The couple also declared separate income for the year 2014, with Carey taking in $6.3 million and Cannon at $2.7 million.

2. He Is The Chairman of TeenNick

Cannon got his start on Nickelodeon in 2001, appearing on the sketch series All That (1994-2005) before going on to star in The Nick Cannon Show (2002-03). Given these homegrown roots, the actor proved to be a smart choice when he was named chairman and developing consultant of TeenNick in 2009. “I am so excited to be back, serving as a representative for teens everywhere,” Cannon told Starplus, “TeenNick is their network and I am here to make sure this is an ultimate destination for and about them.” At 36, the position makes Cannon one of the youngest black chairmen in all of television.

Cannon is also  the “Chief Creative Officer” for Radioshack. According to The Verge in 2015, he was chosen to cater to younger audiences and to help in “creating Radioshack-exclusive products and curating the in-store experience.”

3. He Donated A $2 Million Pair of Shoes to Charity

Nick Cannon turned heads when he wore a $2 million pair of diamond-encrusted loafers on the season nine finale of America’s Got Talent. The pricey footwear was specially made by designer Jason Arashenen, who packed into each shoe more than 14,00 full-cut diamonds set in white gold. The tallying weight of the pair was 340 carats.

Even more surprising, however, was the fact that Cannon turned around and donated the pricey footwear to the St. Mary’s Hospital for Children in Queens, New York. He spoke with MSN on the donation in 2014: “I want to keep this children’s hospital going. It’s one of the oldest children’s hospitals in New York. You go in there and puts everything in proper perspective. You see all that they’re going through and that they can still have a smile on their face. I get so much out of it.”

Cannon has also endorsed the charities Reality Cares, STOMP Out Bullying, and the Get Schooled Foundation.

4. He Is The CEO of NCredible Entertainment

Founded by Cannon and manager Michael Goldman in 2009, Ncredible Entertainment has become a powerhouse in the entertainment industry. It is the umbrella that’s allowed Cannon to pursue and help fund various projects, including MTV’s Wild ‘N Out, Cartoon Network’s Incredible Crew, and TeenNick’s annual “Halo Awards.” Ncredible is also behind the BET parody series Real Husbands of Hollywood (2013-), which stars Kevin Hart, Boris Kodjoe, J.B. Smoove, and Cannon. According to Earn the Necklace, Cannon earned $4 from the show in 2016.

On the music front, Ncredible is a collaborator with RED Distribution (a division of Sony Music Entertainment) in finding and developing new artists. The roster of musicians currently signed to Ncredible include Soulja Boy, Amber Rose, Make It Pop, New Boyz, and Cannon himself, whose last rap album, White People Party Music, was released in 2014.

In 2009, Cannon replaced Jerry Springer as the host of America’s Got Talent. Taking over the position in the show’s fourth season, the multi-talented entertainer earned $70, 000 per episode, equalling that of judge Howie Mandel. This chunk of Cannon’s net worth looks as though it will take a dive, however, as he has seemingly walked away from his hosting duties for season twelve.

“Maybe it was my mistake for signing the contract in the first place,” Cannon wrote on Facebook, “in which I will take full responsibility and have already taken action to restructure my own team of advisors.” Despite this sudden decision, some have pointed out that the Wild ‘N Out star is still under contract. According to TheWrap, Cannon and all four judges re-upped their deals last August, and it doesn’t look as though Cannon’s racially charged joke violated his contract’s disparagement clause. At this point, only time will tell whether Cannon’s departure will actually stick. 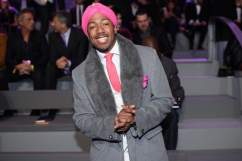