.@rihanna's reaction to @Adele's performance is all of us. #GRAMMYs pic.twitter.com/9YM5LpCnG6

Beyonce might have stolen the show, but Rihanna’s reactions at the Grammys were the star on social media.

Honestly only interested in seeing Rihanna's reaction to performances…let's just focus there.

Your performance is judged based on Rihanna's reaction #GRAMMYs

I gauge every performance solely on Rihanna's reaction to it.

Fans couldn’t believe the only hardware Rihanna took home was her flask.

THE GRAMMYS DO NOT DESERVE RIHANNA.

Rihanna arguably dropped her best album and we 0 for. #GRAMMYs

Rihanna and Beyoncé throwing kisses to each other ?? pic.twitter.com/lXaJjHV5ZH

Many people saw themselves in Rihanna’s reactions. Rihanna was the opposite of a sore loser; even when the camera captured her after she lost an award to someone else, she reacted with class.

If Rihanna's reaction to Bruno Mars ain't me, idk what is. pic.twitter.com/jpXfIDJ885

Rihanna was quite expressive at the Grammys.

"I think it's time for another shot" gotta love Rihanna ?? pic.twitter.com/QD0JlNwQR7

Rihanna drinking at the Grammys was a thing too. People admired her jewel-encrusted flask. And wondered what was in it. According to EW, “She sipped out of it throughout the night and even danced with the flask during A Tribe Called Quest’s performance.”

According to the Los Angeles Times, “Rihanna was caught on camera during the broadcast swigging from the flask, wiping her mouth with the back of her hand and passing it along to the woman next to her, who took a shot as well.”

Rihanna is a legend pic.twitter.com/p1t949hw5v

Rihanna’s bedazzled flask was the #Grammys gift that kept on giving https://t.co/o9uqidti85 pic.twitter.com/TskTVt16Gd

Her reaction to Adele’s tribute to the late pop star George Michael drew special attention. She captured what many people felt when Adele movingly stopped and restarted her performance in honor of the 80s singer. She ended up giving a great performance after the abrupt false start.

She seemed to enjoy Katy Perry’s performance too. 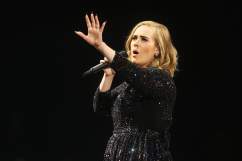 Read More
Beyonce, Breaking News, Grammy, Rihanna
Rihanna's reactions at the Grammys - and her flask and kiss blowing to Beyonce - sparked a lot of buzz on social media. See the best GIFS and tweets.