Those hoping for Rosie O’Donnell to make an appearance on Saturday Night Live to play President Donald Trump’s senior adviser Steve Bannon were disappointed. She did not appear on the February 11 episode, as her publicist previously confirmed to ABC News that she would not be there.

After Melissa McCarthy made a surprise appearance on the February 4 episode of SNL as Trump press secretary Sean Spicer, O’Donnell offered on Twitter to play Bannon in an effort to further mess with Trump. After all a Politico report suggested that the White House was so rattled by McCarthy’s spot-on performance as Spicer that Trump couldn’t even tweet about the episode.

O’Donnell then changed her Twitter profile to a Photoshopped image of herself as Bannon, causing everyone to speculate that she had been booked to be on SNL. However, her representative told ABC News that O’Donnell wouldn’t be SNL. Before the episode aired, O’Donnell did retweet a SNL tweet, but that was just a show of support for Baldwin.

handsome as ever #resist https://t.co/fNl4ogkWW1

O’Donnell and Trump have a long-running feud that dates back to 2006, when O’Donnell was co-hosting The View.

Although O’Donnell wasn’t on SNL, the episode featured plenty of Trump parodies. Baldwin played the president in a brief People’s Court sketch and Melissa McCarthy played Spicer in the cold open. Kate McKinnon also played Kellyanne Conway and Leslie Jones tried to get Lorne Michaels to let her play Trump in pre-taped sketches.

Hopefully, SNL can get O’Donnell to play Bannon before the season ends. 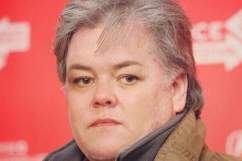