.@souljaboy says that boxing match against @chrisbrown is off! https://t.co/uhQbMudmOh pic.twitter.com/hsMQ0tiMV8

The beef between Soulja Boy and Chris Brown rages on.

The two musicians have been at each other’s throats the last few months, with threats on social media and rumored plans to settle their differences in the boxing ring. According to Soulja Boy, however, Brown backed out of the agreed match on Sunday night, leaving the “Crank That” rapper to openly mock him on Twitter. Soulja Boy continued this trash-talking tirade on Tuesday morning, and it looks like he’s still hell bent on getting Brown in the ring.

Soulja Boy went in on the “Loyal” singer, saying that when he “met Chris Brown he knew he was a b*tch,” before going on to tweet: “Just how u told the whole world I’m a snitch and u gon whoop me tell them how u scared to fight me and won’t sign the paper n*gga.” Soulja even warned Brown that he needed to “leave California.”

You need to leave California. Running from a fight that u called out go back to where u from with that pussy shit for real boy @Chrisbrown

He went on to threaten that he would “live stream” Brown so that he and fans could find out why he “didn’t sign the paper [to fight] and give the fans what they deserve.”

Soulja Boy reportedly trained for the boxing match with current heavyweight champion Floyd “Money” Mayweather, before switching over to former champ Evander Holyfield, according to XXL. It’s obvious that Soulja took the bout very seriously, and planned to do whatever it took to topple Brown.

Slap the shit out you nigga @chrisbrown ☝??

The verbal assault went on to include other tweets from fans, which Soulja Boy gladly retweeted and gave his two cents. This included responding to why he and Chris Brown will no longer fight, to which the rapper once again stated: “Because he’s a b*tch.”

Soulja Boy also takes the opportunity to refer to himself as Draco, which is the rumored title of his next major label release.

Because he's a bitch Wendy and scared to fight Draco ?? https://t.co/SzWq0eHUrF

Chris Brown has not responded, either publicly or on Twitter, to these personal attacks. 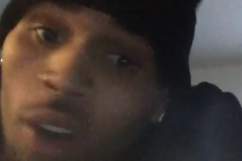