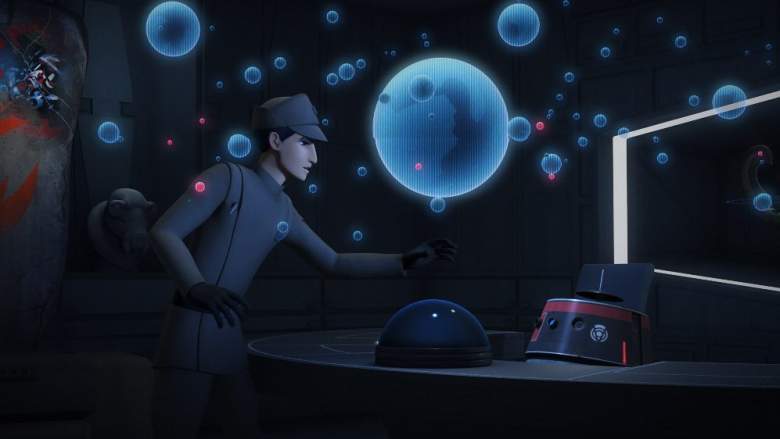 After last week’s shocking episode, “Legacy of Mandalore” ended with Sabine Wren deciding to stay with her family to help restore Mandalore to its former glory, Star Wars Rebels gives us a different perspective of the Galactic Civil War. In “Though Imperial Eyes,” we head behind enemy lines to see what Agent Kallus’ price will be for being a Rebel spy.

Here’s a look at the action in “Through Imperial Eyes.”

In Someone Else’s Shoes

The episode kicks off like we’re playing Dark Forces. We’re given a look inside Kallus’ quarters through his eyes. An alarm wakes him up and a Stormtrooper tells him to to go “battle stations.” He arrives on the bridge of the freighter and Lieutenant Lyste tells him that they are trying to intercept a ship that blasted its way out of Lothal. Using a tractor beam, they get the shop connected to the freighter.

The troopers drag the ship’s pilot onto the Imperial freighter and it turns out to be Ezra! “What are you looking at, you Imperial scum?” he snaps.

On The Way to the Chimaera

After the title, Kallus orders the troops to take Ezra to the detention center. Chopper and AP-5, who were also on the ship, are told to wait for processing. “We can do that just fine,” AP-5 says.

In the detention center, Kallus tells the troopers that he’ll interrogate Ezra himself. After shutting off the cameras and locking the door, Kallus yells at Ezra, since his face is so recognizable. Ezra insists that no one will recognize him. Kallus has a bigger problem though. Ezra tells him they think the Empire was tracking his last Fulcum transmission and it’s up to Ezra to get Kallas away from the Empire. Ezra and Kallus don’t trust each other though, as Ezra thinks Kallus could be playing a long-game as a double agent. They’ll have to put aside their differences for now, though.

Lyste interrupts their conversation to tell Kallus that Grand Admiral Thrawn has arrived and called the officers to his ship. Lyste decides to bring Ezra along to prove to Thrawn that he’s effective at capturing Rebels. AP-5 uses an excuse to come along with Ezra.

On the way to Thrawn’s ship, Lyste tosses the audience an Easter Egg by revealing that this is the first time he’s been called to meet a ranking officer since after the incident with a certain Alderaan princess in “A Princess on Lothal.” (That remains the only appearance of Princess Leia on the series so far.) There’s another Easter Egg – Thrawn’s ship is called the Chimaera, which was the same name of his ship in Timothy Zahn’s Thrawn Trilogy novels.

Once they arrive on Thrawn’s ship, the troopers take Ezra to the detention center, while AP-5 and Chopper have a look around. It turns out that Kanan and Rex are in a stolen Imperial shuttle, speeding on their way to Ezra’s location. They are surprised to learn from Chopper that they are now on Thrawn’s ship. It changes their plan, so Chopper now has to get new clearance codes for Kanan and Rex.

Along their way to Thrawn’s office, Lyste and Kallus see district commanders. Outside Thrawn’s office, a trooper requests to see their cylinders, which act as keys to clear them. Inside, they find Thrawn sparring with two assassin droids (actually, they look like Deathtroopers from the Dark Forces games). And in yet another Easter Egg, Thrawn uses the override code “Rukh” to get the droids to stop. This is a reference to the Norghi alien who served as Thrawn’s bodyguard in Zahn’s novels. The door slams shut, and it turns out that Kallus and Lyste aren’t being brought in to meet Thrawn.

Gasp! It’s Colonel Yularen from The Clone Wars! Thrawn has called him in to help find the “Fulcrum” spy.

An Old Friend from the Clone Wars Arrives

Thrawn catches everyone up on the situation and Lyste shows his enthusiasm. Yularen will interrogate all possible suspects and tells them to be suspicious of everyone. Thrawn then explains that he is searching for the rebels’ base and has figured out that it must be within the Lothal sector.

After the meeting, Yularen pulls Kallus aside, asking him if he has any idea who the traitor might be. Kallus suggests that it must be an officer, but Yularen reminds him that it could be anyone thanks to technology. He tells Kallus that the spy might have a method of transmitting that they aren’t aware of.

Later, Governor Pryce appears to ask about the Lothal freighter they intercepted. After she praises Lyste, she walks away and Kallus hints to Lyste that the spy could be Pryce. Lyste is confused, and Kallus swaps cylinders with Lyste. He convinces Lyste to keep an eye on Pryce.

Thrawn is convinced that the spy was at their meeting. Then Yularen notes that they picked up Chopper’s signal to Rex and Kanan, just after Lyste and Kallus arrived. Meanwhile, Kallus uses Lyste’s cylinder to shut down all the cameras and unlock Ezra’s detention cell.

Kallus tells Ezra that Thrawn is very close to discovering the location of Chopper Base and needs to know where it’s located himself. That way, Kallus could remove the planet from Thrawn’s list. But Ezra doesn’t buy that. AP-5 suggests that they sneak into Thrawn’s office to delete Chopper Base’s real location and steal the clearance codes they need.

As they leave, we see Thrawn, Yularen and Pryce arrive at Ezra’s cell. The records show that Lyste was the last person to open it, since Kallus used Lyste’s cylinder.

Meanwhile, Kallus and Ezra (now in an officer’s uniform) sneak up to Thrawn’s office. Using a Jedi Mind Trick, Ezra convinces the trooper that he’s Lyste and they get into the office. Chopper then sends the clearance codes to Kanan and Rex. Then, the droid erases Atollon from Thrawn’s map. Just as he does that, AP-5 tells Kallus that Thrawn is heading to his office. They have to move, quickly!

The trooper tells Thrawn that Lyste is inside. Kallus tells Ezra he has a plan. When he turns around, Kallus is gone.

As Thrawn enters his office, he finds it curious that he sees no Lyste inside. Kallus snuck into Thrawn’s training room to turn on the assassin droids. Just as Thrawn decides that he hasn’t had his map edited (even though we know it was), the droids barge into the room. Thrawn tries to use his override code, but it doesn’t stop the droids. While Thrawn fights them, Ezra and Chopper sneak out. Thrawn sees them leave, but he’s convinced that it’s Lyste.

Rex and Kanan finally arrive and send the clearance code. It works, but Yularen is skeptical about it and orders Pryce to go to the landing bay. Pryce orders Rex and Kanan to remove their helmets, but fighting breaks out instead. Lyste was still following her and sees her shooting a Stormtrooper (really Rex in disguise) and mistakes this for proof that Pryce is the traitor.

Chopper then seals off the hangar and we see Yularen watching the scene. At that moment, Lyste stuns Prye. Yularen sees that, which is proof to him that Lyste is the traitor! Ezra nods at Lyste, who is then shocked to learn that he helped them escape.

Rex and Kanan get their shuttle started, and Ezra calls on Kallus to come aboard. But Kallus has now realized that he’s planted enough evidence to convince the Empire that Lyste is Fulcrum. He tells Ezra to go, thinking that he can do more good while he’s still within the Empire.

Jut at that moment, the troopers finally blast through the hangar doors. They see Kallus firing at the shuttle and Lyste knocked out on the ground. Kallus tells Yularen that Lyste is the traitor.

Back in Thrawn’s office, Yularen outlines all the evidence to prove Lyste is the traitor. As he leaves the office, Kallus smirks, thinking that he’s successfully convinced Thrawn and Yularen that he’s not Fulcrum.

“Things have fallen into place a little too perfectly for my liking,” Yularen tells Thrawn privately. “And I don’t think Lieutenant Lyste is capable of what you’ve accused him of.”

A trooper delivers Ezra’s helmet, which Thrawn connects to the Lothal rebels because the art on it was done by Sabine. That means that Ezra was their shuttle thief. If that was the case, why didn’t Kallus tell them that, Yularen wonders.

“Because, Colonel Yularen, Kallus is the rebel spy, Fulrum,” Thrawn says. Thrawn figured out Kallus’ plan, but it doesn’t appear that he plans to kill Kallus right away.

“I believe Agent Fulcrum will prove far more useful to the Empire than Kallus ever was,” Thrawn says as the episode ends.

“Through Imperial Eyes” was a great episode centered on Kallus and caught us up on Thrawn’s search for Phoenix Squadron. Plus, it was filled to the brim with neat Easter Eggs. Hopefully the rest of season three doesn’t have any more filler episodes that take us away from the main story.

The next episode of Rebels is “Secret Cargo,” which airs on March 4. Here’s the full episode description: “A group of rebels affected by the Galactic Empire band together aboard a freighter in an attempt to stop the Empire from gaining control of the galaxy.” 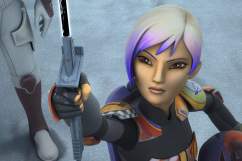