Tonight is the long-awaited premiere of The Good Fight on CBS, but the premiere is the only episode available on CBS. The rest of the season will air online via CBS All-Access. Get all the details on when to watch the show, the cast and what channel it airs on below.

HOW TO WATCH THE SHOW AFTER THE PREMIERE: Click here for instructions on how to watch The Good Fight every Sunday via CBS All-Access. After the premiere, viewers will only be able to watch new episodes each week online.

CBS OFFICIAL SEASON 1 SERIES SYNOPSIS: THE GOOD FIGHT picks up one year after the events of the final episode of “The Good Wife.” In the new series, an enormous financial scam has destroyed the reputation of a young lawyer, Maia Rindell, while simultaneously wiping out her mentor and godmother Diane Lockhart’s savings. Forced out of Lockhart & Lee, they join Lucca Quinn at one of Chicago’s preeminent law firms. 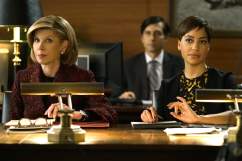 ‘The Good Fight’ CBS All-Access Live Stream: How to Watch the Show Online

Read More
CBS, TV
Get the details on the CBS premiere of The Good Fight. When is the show on CBS All-Access? What time is the show on and what channel does it air on TV tonight?