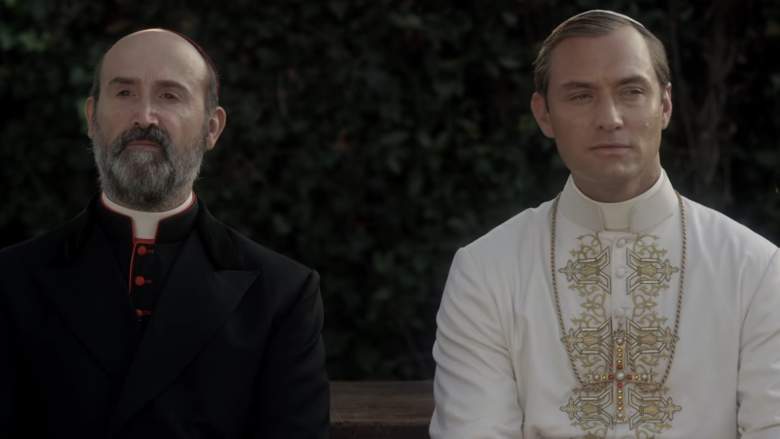 Just a month after it started in the U.S., HBO is airing the season finale of The Young Pope, the series that stars Jude Law as the fictional first American pope. The series was created and directed by Oscar-winning Italian filmmaker Paolo Sorrentino, and bore all the hallmarks of his work. Read on for a preview of season one’s final episode.

In The Young Pope, Law stars as Lenny Bolardo, who was just elected pope. He chose the name Pius XIII and has lived up to that name, directing the Catholic Church to go back to basics. He banned homosexuals from becoming priests and refused to be seen in public until he took a trip to Africa. He even delivered his homilies with his back to the crowd in St. Peter’s Square.

In episode nine, Cardinal Gutirrez’s investigation into Archbishop Kurtwell’s alleged sexual abuse of children in New York took a drastic turn when he discovered that Kurtwell had a secret son. Gutierrez insisted that Kurtwell come back to Rome with him to stand trial before the Pope. Back in Rome, Lenny was left crushed by the death of his mentor, Cardinal Spencer. While sitting on Spencer’s deathbed, Lenny recounted his calling – after praying to God, he revived a friend’s mother who is still alive.

In the upcoming episode, Lenny praises Gutierrez for his work and Kurtwell has to answer for his crimes.

EPISODE DESCRIPTION: “Tenth Episode” – “In the Season 1 finale, Gutierrez returns to Rome a changed man after the Kurtwell investigation, prompting the pope to make a decision about the archbishop’s fate. Meanwhile, Father Tomasso gets a promotion; and Lenny makes an unexpected change in travel plans and policy after learning about a possible reconciliation.”

To meet the cast of the series, click below: