John Wayne Airport released video of Harrison Ford‘s nearly fatal plane incident from February 14, showing that the 74-year-old actor might want to start leaving the flying to someone else.

The video shows Ford flying his yellow Aviat Husky low over an American Airlies 737 taxiing slowly on the runway at the Orange County, California airport. The airliner had 110 passengers aboard, The Associated Press reports. A few minutes later, the plane left John Wayne on time and arrived in Dallas.

Ford was supposed to land at a runway that runs parallel to the taxiway, NBC Los Angeles reports. In previously released audio, Ford is heard asking air traffic control if the airline was “meant to be underneath me.” You can hear the audio in the below video.

Ford’s publicist has yet to comment on the incident and no reason for his mistake has been given. The Federal Aviation Administration is investigating.

Ford, who is a member of the Kiddie Hawk Air Academy as a Living Legend of Aviation, is an avid pilot and collects vintage planes. This is the second close-call he has had in less than two years, as he was seriously injured when he crashed a World War II-era plane onto a golf course in Los Angeles.

In a 2010 interview with the Daily Mail, Ford compared flying to good music. He explained:

Flying is like good music: it elevates the spirit and it’s an exhilarating freedom. It’s not a thrill thing or an adrenaline rush; it’s engaging in a process that takes focus and commitment. I love the machines, I love the aviation community. I used to own aeroplanes and have pilots flying them for me, but I finally realised they were having more fun than I was. They were getting to play with my toys. I was 52 when I started flying – I’d been an actor for 25 years and I wanted to learn something new. Acting was my only identity. Learning to fly was a lot of work, but the net result was a sense of freedom and a pleasure in seeing to the safety of myself and the people who fly with me.

The actor is best known for playing Han Solo in the Star Wars movies and Indiana Jones. Ford’s next film is Blade Runner 2049, which opens on October 6, 2017. 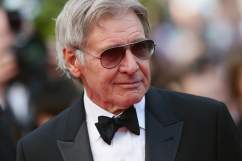