If your Hollywood tour happened to end up inside the #Oscars pic.twitter.com/RJFbNSi37I

During tonight’s 89th Academy Awards, Jimmy Kimmel shocked a group of people who thought they were on a Hollywood tour by bringing them to the Oscars.

The starstruck fans seemed to be in shock as they were introduced to some of Hollywood’s biggest stars, like Meryl Streep, Ryan Gosling, Mahershala Ali, and Jennifer Aniston.

When Kimmel learned that the first two fans who entered the Dolby Theater were engaged, he had Denzel come up and marry them. Jennifer Aniston gifted them with her own sunglasses.

The fans were itching to get the entire experience on camera with shaking hands.

Now that's a #Hollywood bus tour… who would think U would drop in @Oscars2017_Live #Oscars @TheAcademy @JenniferAnWorld pic.twitter.com/dIklFV4Jm2

Jimmy Kimmel didn’t shy away from the subject of politics during his opening monologue this evening. He poked fun at Donald Trump and his fake-nemesis Matt Damon. “When I first met Matt, I was the fat one,” he laughed.

Poking fun at Mel Gibson, Kimmel said, “There’s only one ‘Braveheart’ in the room. And he’s not going to unite us either.” 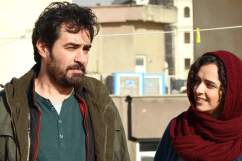