Pants have come off at the #GRAMMYs. Here's @twentyonepilots accepting their award for best pop duo/group performance pic.twitter.com/ESDJenKGB3

Twenty One Pilots made a promise, and tonight, they kept it.

At the 2017 Grammy Awards, Twenty One pilots won Best Pop/Duo Group Performance for Stressed Out, and took off their pants to accept the award. The guys said that before they were anyone, they were sitting in their apartment, watching the Grammys, and noticed they were all in their underwear. They promised that if they ever won a Grammy one day, they would do it in their underwear. That’s exactly what they did.

“Stressed Out”, which won Twenty One Pilots their award tonight, is the band’s fourth studio album. It was written by Tyler Joseph, and initially released on April 28, 2015. “Stressed Out” had sold over 2.4 million copies as of December 2016, and is ranked No. 62 on Billboard’s list of 100 Best Pop Songs of 2016.

Speaking to Billboard about the song, the duo said, “From the minute the album came out, ‘Stressed Out’ was raising its hand as a hit record. It was streaming and selling strongly, even as ‘Tear in My Heart’ was doing so well. I could have never imagined that [‘Stressed’] would stay at the top of the Alternative Songs chart for so long or cross to pop so fast, but I think we all felt like we had a hit song.” 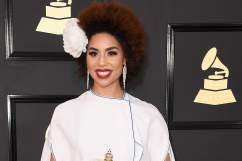 Read more about Twenty One Pilots at the 2017 Grammys in Spanish at AhoraMismo.com: 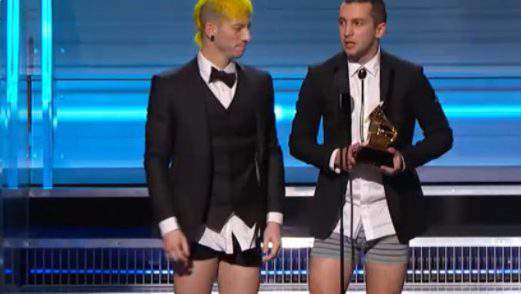