Ben Affleck announced on his Facebook page today that he just completed a stint in rehab for alcohol addiction. The news came just a few days after it was rumored that Jennifer Garner was calling off their divorce.

I have completed treatment for alcohol addiction; something I’ve dealt with in the past and will continue to confront. I want to live life to the fullest and be the best father I can be. I want my kids to know there is no shame in getting help when you need it, and to be a source of strength for anyone out there who needs help but is afraid to take the first step. I’m lucky to have the love of my family and friends, including my co-parent, Jen, who has supported me and cared for our kids as I’ve done the work I set out to do. This was the first of many steps being taken towards a positive recovery.

The 44-year-old Affleck previously went to rehab in 2001, when he was 28 years old and a rising star in Hollywood. At the time, he let a publicist do the talking, confirming with ABC News that he went to rehab. Affleck’s father, Tim, also fought alcoholism.

“Ben is a self-aware and smart man who has decided that a fuller life awaits him without alcohol,” David Pollick, his publicist in 2001, said at the time. “He has chosen to seek out professional assistance and is committed to traveling a healthier road with the support of his family, friends and fans.”

The news that Affleck also confirmed why he was seen in Los Angeles in Jannuary with detox nurse Elizabeth Weaver. Weaver, who confirmed to Heavy.com in January that the two were just friends, is the founder of a concierge nurse service that also provides “sober companion support.”

Back on March 8, a source told People Magazine that Garner called off their divorce. However, in today’s statement, Affleck still referred to Garner as his “co-parent.” The two were married for a decade before they announced plans to divorce in 2015. They are parents to Violet, 11, Seraphina, 8, and Sam, 5.

Affleck will soon start work on his solo Batman movie, which he will star in and co-wrote. He was originally supposed to direct as well, but Matt Reeves (War for the Planet of the Apes) will direct instead. 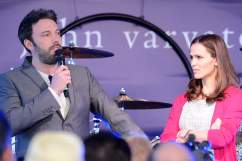