Clem Curtis, the lead vocalist of the sixties British group The Foundations, has died. He was 76 years old. How did he die?

According to the Daily Mirror, Curtis, unofficially nicknamed “The Godfather of British Soul,” died as a result of lung cancer. The singer was diagnosed earlier this year, as his wife issued told BBC: “Unfortunately, he has been diagnosed with two cancers. Doctors cannot do anything about it. So, we’re spending time at home having our happy days together. It depends what his body and mind will decide to do. We had the prognosis about six months ago.”

During his tenure, the group would go on to earn multiple worldwide hits, including “Baby Now That I’ve Found You” and “Back On My Feet Again,” and “Any Old Time (You’re Lonely And Sad).” He departed the group in 1968, but would return in various line-ups over the years. Curtis also went on to have a lengthy solo career, both as a singer and an actor, appearing in the stage version of The Wiz, as well as the British television shows Airport (1996-2008) and The Bill (1984-2010). 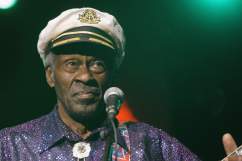 Chuck Berry Cause of Death: How Did the Rock Legend Die?