Dave Chappelle is back in the spotlight after a lengthy hiatus, and he’s got lots to say.

The legendary comedian, whose schedule to air two standup specials on March 21, sat down with CBS This Morning to discuss his legacy, his sketch series Chappelle’s Show (2003-06), and, in an unexpected turn, comedy duo Keegan-Michael Key and Jordan Peele. In the past, Chappelle criticized the duo for copying his show, joking about “watching Key and Peele do my show the last five (expletive) years.”

Keegan-Michael Key and Jordan Peele pose with the Emmy for Outstanding Variety Sketch Series during the Emmy Awards on September 18, 2016. (Photo by FREDERIC J BROWN/Getty)

Chappelle clarified his comments, and his reasoning behind them. “No. I’m a fan of this show,” he asserts, before saying, “I fought the network very hard so that those conventions could come to fruition,” he said. “So, like the first episode I do, that black white supremacist sketch. And it’s like, ‘Well, that’s 10 minutes long. It should be five minutes long.’ Why should it be five minutes long? Like, these types of conventions. I fought very hard. So when I watch Key & Peele and I see they’re doing a format that I created, and at the end of the show, it says, ‘Created by Key & Peele,’ that hurts my feelings.”

Watch the trailer for Chappelle’s upcoming standups below. 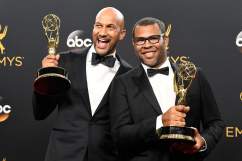 Which One Is Peele in ‘Key & Peele?