Drake’s been a busy man as of late. His latest project, More Life, has sent shockwaves throughout the music industry, and he’s also managed to break a score of online streaming records. Still, the rap superstar has found time to his growing collection of tattoos. Drake has gotten two new designs in the last week alone– a portrait of pop singer Sade, and one we’ll get into later on this list–bringing his total to a surprisingly high 25 tattoos.

Of these roughly two dozen tats, however, not all of them are winners. From self-mythologizing imagery to life credos, and of course, the ones that are just plain silly, these are the five that have proven to be lowpoints in Drake‘s love affair with body ink.

Hot skulllll for the Boy ?? @champagnepapi ??

To be fair, the sentiment behind this one is admirable. Drake received the “flaming skull” tattoo, which reads “Unruly” underneath it, as a gesture of respect to dancehall artist Popcaan. The two become very close in 2015, and their shared interests in musical styles and Jamaican culture led to Drake getting this little beauty the following year.

It’s meant to be emblematic of the Unruly records label that Popcaan is signed to, though the fact that the skull is engulfed in fire is a bit puzzling, seeing as the Unruly logo is of a skull with a tilted crown on its head. It doesn’t help that the skull looks exactly like the kind of tattoo you could get out a bubblegum machine for a quarter– that or a promotion for the 2007 film Ghost Rider.

Popcaan returned the shoutout with a tattoo of Drake’s OVO logo, which, as you can see here, proves him the victor in this ink exchange.

DRAKE GOT A NEW TATTOO IS IT AN EYE pic.twitter.com/igoaqCo4ua

The “Eye of Horace” tattoo, which, true to its title, is nothing but a large eye, is the result of Drake’s lone tattoo regret. He originally had an image of Toronto’s CN Tower on his left bicep, but quickly decided against it, and covered it up with this large, nondescript eye. Its a reference to the Egyptian symbol for good health, protection, and royal power, and while Drake certainly prescribes to all of these things, the rapper has never once voiced his interest in Egyptian culture.

This tattoo feels slapped on because it was indicative of a “cool” meaning, which is never a good excuse when it comes to permanent body markings. To make matters worse, Drizzy decided to get another tattoo of the CN Tower afterwards, proving that this eye, if anything is a symbol of indecision. On the bright side, tat number two doesn’t look half bad (check it out here).

Drake was born on October 26, 1986. This special month is celebrated in the title of his record label, October’s Very Own, which comes complete with a sleek-looking logo involving an owl. Drake even has the owl tattooed on the back of his right shoulder. Sadly, this proved to be far too little October love for Drizzy, who proceeded to get a “Jack-O-Lantern” tattoo in 2016. As you can tell from the image above, the description is about as head-scratching as the final product.

The tattoo resides on the inner forearm of Drake’s right hand, and it is a ghastly sight for reasons not affiliated with Halloween. Fans have theorized that because pumpkin is “calabaza” in Spanish, the tat might be a subtle nod to Calabasas, California, where Drake is said to do much of his recording. But even if this theory were true, it doesn’t take away from the tackiness that is this tattoo. No treats here.

As was alluded to in the opening paragraph, this tattoo is less than a week old. Drake got it as a callback to his old Twitter handle, which, before he could get his hands on his own name, was modeled after the mens cologne “Drakkar Noir.” The rapper decided to take irony in the handle’s origin, and his tattoo not only bears the phrase, but presents it in the form of the Drakkar Noir cologne bottle.

This was not a good look. It makes logical sense, and its definitely a nice sentiment, but the tattoo borders too close to meme-worthy to be taken serious as a legitimate reminder of who pre-fame Drake was. And, as was expertly noted by the staff over at The Ringer, the skewed angling of the cologne bottle only makes this tattoo even more bizarre.

Does Drake Have A Rihanna Tattoo?! Is This Old News?? https://t.co/yqspNfB9VJ @Mastermind pic.twitter.com/WUJdwNgWKH

Drake and Rihanna have had a rich, complex history together. Rumored lovers, spectacular collaborators, musical icons, whichever titles they assume, they are adored by many. Which is why Drake’s tattoo of Rihanna–while she inexplicably eats an ice cream cone– is so incredibly bad. For starters, the photo that inspired it (seen here) looks nothing like it, and Rihanna herself goes from moody to some vague form of confusion.

Maybe its the placement (awkwardly tucked into Drake’s bicep) or the affirmation that one should never get an image of someone eating, but this uncomfortable tattoo sits comfortably at the bottom of Drake’s list. When one thinks of Drake and Rihanna, this is not they image that should come to mind. The duo’s matching shark tattoos are a definite improvement (check them out here). 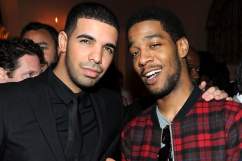 Read More
Drake, Music, Rihanna, Tattoos
The superstar rapper has 25 tattoos, and not all of them are winners.