Drake is a rare commodity in the hip-hop community: a rapper with mass pop appeal. His ability to weave between flows and musical sounds has made him of the genre’s biggest and most versatile stars. His last album, Views, was nominated for multiple Grammy Awards including Album of the Year, while More Life, the highly anticipated playlist that’s rumored to drop this month, proves that Drake is not only capable of massive success, but also a worth ethic that’s made him one of hip-hop’s most ubiquitous figures.

Amidst all the acclaim and chart-topping singles, Drake (born Aubrey Drake Graham) has amassed a bank account more than worthy of his braggadocios rhymes. Sources vary on the exact number, but most sites, including The Richest, estimate Drake’s net worth to be at about $100 million. How has he made his fortune? What does he spend his riches on? Read on to find out.

1. He Bought His Hidden Hills Home For $7.7 Million

Drake currently resides in Hidden Hills, California, which is a gated neighborhood next to Calabasas. He purchased the home for $7.7 million in 2012, and dubbed it the “YOLO Estate” in reference to the “You Only Live Once” acronym that he popularized the year before. The estate quickly became known for its lavish scale, which include waterfalls, a mechanical bull, a tennis and basketball court, a beach volleyball court, and a 25-seat movie theater.

Drake referenced Hidden Hills in his 2016 single “Summer Sixteen,” where he famously compared his swimming pool size to that of Calabasas neighbor Kanye West. “I mean Ye’s pool is nice, mine’s just big is what I’m sayin” Drake rapped, revealing that not only does his pool outsize West’s, it was specifically designed to be larger than the pool at the Playboy Mansion. Drake put the “YOLO Estate” up for sale in January, where, according to the Observer, it was priced at $20 million. The listing has since been removed.

Drake announced his partnership with Jordan Brand in 2013. “Today also happens to be one of the best days of my life,” he said during a live performance, “You know, growing up, I’m sure we all idolized this guy– he goes by the name of Michael Jordan. So today, I came to Portland, Oregon and I officially became inducted into the Team Jordan family.”

The partnership proved hugely successful for both parties, as Drake was given a platform to widen his OVO brand (and his bank account), and Jordan Brand received the push of one of the biggest artists in the world. According to Complex, Drake’s Jordan cosign has created “an undeniable energy that hasn’t been around in quite some time.”

In January 2017, Footwear News reported that Drake’s OVO Air Jordans sold out in record time and were being resold for over $10,000 a pair.

OVO was initially used as a merchandising tool to distinguish Drake’s music. He would regularly mention the acronym, which stands for October’s Very Own on songs and during live performances. After the commercial success of his second album Take Care (2011), however, Drake was given the opportunity to turn OVO into a legitimate record label, alongside co-founders Noah “40” Shebib and Oliver El-Khatib. In 2012, OVO signed a deal with Warner Bros. Records that would cover all promotion and distribution.

To date, Drake has released three full-length projects under OVO: Nothing Was the Same (2013), If You’re Reading This It’s Too Late (2015), and What A Time To Be Alive (2015). Other names on the roster include PartyNextDoor, Roy Woods, Dvsn, and Majid Jordan, along with producers Boi-1da, T-Minus, Mike Zombie, and Nineteen85. Each of these acts have contributed music to Drake projects and released respective solo material.

OVO also profits from merchandising and hosting a yearly music festival in Toronto.

4. He Has The Highest Grossing Hip-Hop Tour Ever

Summer Sixteen Tour is now the highest grossing hip-hop tour of all time with a total gross of $84.3 million off 54 shows ? pic.twitter.com/i7BTrPGUwl

The Summer Sixteen Tour (2016) is currently the highest grossing hip-hop tour of all time. Drake and Atlanta rapper Future performed 54 shows over a three month span, and wound up taking in a whopping $84.3 million in total. This toppled the previous record holders, Jay-Z and Kanye West, who grossed $75 million during their Watch The Throne Tour in 2011. According to XXL, however, what makes Drake’s achievement more impressive is that he suffered an injury towards the tour’s final run, which resulted in cancellations.

Had he been able to perform these in addition the already large gross, there’s no telling how much money Drake and Future could’ve earned. Drake’s previous tours have also done wonders for his net worth, as 2012’s Club Paradise Tour took in $42 million, and 2013’s Would You Like A Tour? finished up with $46 million. If this is any indication, Drake’s current Boy Meets World Tour will be another huge breadwinner.

Since the release of his 2009 EP So Far Gone, Drake has been a lightning rod for commercial success. His debut album Thank Me Later (2010) went platinum with the top-10 hit “Find Your Love,” while Take Care (2011) went four times platinum, selling a whopping 400,000 copies and winning the 2013 Grammy Award for Best Rap Album. Drake’s subsequent projects have gone on to score similar numbers, with platinum certification and critical acclaim across the board. He’s also tied the all-time record for entries on the Billboard Hot 100, a title he shares with his mentor Lil Wayne, who has 132.

Drake’s most recent album, Views (2016) has proven to be his most successful to date. It became the first album to earn a billion streams on Apple Music, while also spending 13 non-consecutive weeks atop the Billboard 200. According to Billboard, Views has sold over 4.14 album-equivalent units in the U.S. alone, bringing Drake’s career total to 10 million albums worldwide. This impressive feat proves that while Drake may be profiting from outside ventures, music will always be the biggest source of his still-growing net worth. 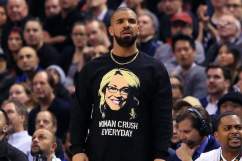