Ciara was reportedly involved in a car crash in Los Angeles earlier today.

According to TMZ, witness reports say that Ciara was driving a white Mercedes SUV, when she was apparently slammed into while making a left turn. The vehicle was T-Boned by another SUV, a grey Volvo, though there has been no report of who the other driver was. Apparently, Ciara was clutching her chest and her shoulder after police responded on the scene.

#Ciara, son #Future and husband #RussellWilson ? gearing up for their newborn! pic.twitter.com/2kt6Jsv7uz

The concern, of course, besides the obvious concern of a car accident, is that Ciara is currently in her third trimester of pregnancy, as she’s expecting her first child with husband Russell Wilson. The family recently posed for a controversial photoshoot in Harper’s Bazaar. Based on accounts of Ciara being able to walk around and talk, there thankfully looks to be no serious injury for the R&B singer. Wilson confirmed this when he tweeted out to concerned fans: 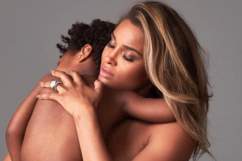 Future Fans Are Not Pleased With Ciara’s New Photoshoot