It looks like Kanye West could go from supporting player on Keeping Up With The Kardashians to reality star sooner than later.

According to RadarOnline.com, NBC is currently in talks with West about a possible hosting position for the planned revival of American Idol. Sources surrounding the deal reveal that the network is very interested in getting the rapper’s involvement at all costs, saying “Kanye is at the very top of the wish list, not Simon Cowell.”

Plans have also been put in motion to have host Ryan Seacrest return. “Seacrest has put his name forward during his negotiations to come back as host and NBC are salivating over it,” sources tell Radar, “If Ryan hosting can help them get Kanye, that’s a happy result for NBC.” According to the site, “Kanye is weighing the options and is even grilling [former judge] Jennifer Lopez on what’s involved… It’s not an easy gig, but the offer he’s got is proving very hard to refuse.”

This is not the first time West has been affiliated with the show. In 2016, the “Ultralight Beam” rapper took a comedic approach and pretended to audition for then-hosts Lopez, Keith Urban, and Harry Connick, Jr. Check it out below. 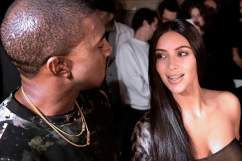