Tonight airs the season 2 premiere of Little Big Shots, a children’s variety television and talent show. Get all the details on what to expect this season, what channel to watch the show schedule and more below.

SEASON 2 SYNOPSIS: NBC reports that, “Viewers will be treated to never-before-seen acts, including everything from a pint-sized cowboy and snail whisperer to a professional animal caller and remarkable young experts in anatomy, geography and even Shakespeare. Adding to the fun will be kids who are incredibly gifted in music – ranging from opera to pop to rap, on instruments that include piano, guitar, drums and more. “Little Big Shots” will also showcase kids who took the Internet by storm with viral videos, guaranteeing lots of comedy and surprises in this engaging series that celebrates phenomenal children from all over the globe.”

PREMIERE SYNOPSIS: “We’re Back” – The March 5 season premiere will feature adorable 5-year-old Lucy (Pleasanton, CA), who is a huge fan of Abe Lincoln and can recite the Gettysburg Address; charismatic 4-year-old worship leader Caleb (Greensboro, NC); 12-year-old singing sensation Elha from Manilla; and 6-year-old science wiz Mason (Sherman Oaks, CA), who enlists Harvey’s help with an explosive experiment. Also wowing viewers will be 6-year-old basketball phenom and You Tube sensation Jaliyah (New Orleans, LA), who gets a very special surprise on the show, and 4-year-old anatomy expert Brielle (Salinas, CA), who impresses Harvey with her knowledge of every bone in the human body. 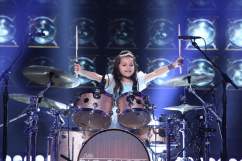 Read More
TV
What time is the 2017 premiere of Little Big Shots on TV tonight? Check out the season 2 schedule and see what channel to watch as well.