Just when you thought there were too many time-traveling TV shows, Fox is here to deliver another one. Making History is a little different though, since it's a sitcom. The comedy, starring The Mindy Project's Adam Pally, centers on a man's journey to fix the past after he screwed it up by dating Paul Revere's daughter. The new show kicks off on Sunday, March 5 at 8:30 p.m. ET.

Making History kicks off with Dan, a facilities manager at a Massachusetts college, discovering the secret of time travel. When he goes back in time, he falls in love with Deborah Revere, Paul Revere's daughter, and then delays Revere's famous Midnight Ride. Dan enlists the help of his friend, history professor Chris, to make sure that the American Revolution still happens like it should or the future as we know it will change forever! Great Scott!

Pally is the star of the show. He's best known for his role as Peter Prentice on The Mindy Project, which started on Fox and now airs on Hulu. He also played Max on the cult ABC sitcom Happy Endings. On the movie side, he's been seen in Slow Learners, Don't Think Twice, Dirty Grandpa and Iron Man 3. Click through to meet his Making History co-stars. (Quantrell Colbert/FOX) 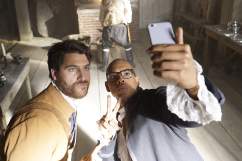 ‘Making History’ Series Premiere: What Time & Channel Is it on Tonight?

Read More
FOX, TV
Making History is another new time-travel series, but this one's funny on purpose. Meet Adam Pally, Leighton Meester and the rest of the cast.