While Remy Ma continued her verbal onslaught with diss tracks like “Shether” and “Another One,” Nicki Minaj was busy living the high life at Paris Fashion Week.

The “Anaconda” rapper has made several appearances during the lavish seven day event, but nowhere was Minaj’s presence more prevalent than when her nipple reportedly popped out of her black bra and lavish fur coat coat. Though corrected almost immediately, it left a definite impression on the fellow attendees.

According to the Daily Mirror, Minaj handled the mishap with grace, and proceeded to pose for photos with an all-star roster of talent like Pharrell Williams, Gigi Hadid, and designer Karl Lagerfeld (seen above).

This isn’t the first time Minaj has turned heads in Paris. Earlier this week, she also sported a plunging black dress that left one of her breats completely exposed, and covered only by a diamond-shaped nipple pasty.

So while she may have announced her disinterest in responding to Remy Ma, its obvious that Minaj is anything but shy when it comes to her public image. 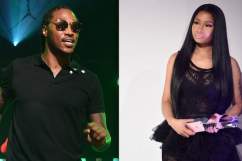