Although S-Town is indeed connected to Serial, it is not Serial Season 3. In fact, the podcast is being narrated by Brian Reed instead of Sarah Koenig. The podcast is, however, the first official spinoff series of Serial, created by Serial Productions. If you’re wanting to listen to Serial, though, you’re going to have to wait quite a while. The premiere of Season 3 might not be until 2018.

S-Town was inspired by a message from an Alabama resident, according to the podcast’s website. The resident, so far known only as “John,” asked a reporter to investigate a wealthy family’s son after he bragged about getting away with murder. Some have guessed that victim being investigated is John Willie Smith, who may have buried $100,000 in gold right before he died.

As for Serial, the podcast hasn’t been canceled. And despite so many public complaints about Season 2, Telegraph reported that Season 2 actually had more viewers than the first season. The last episode had 50 million downloads. So the third season will definitely happen, and apparently it will focus on a murder mystery again. But the premiere date for the third season is the subject of debate. Telegraph recently reported that Season 3 will premiere this summer. However, this isn’t likely accurate. Esquire just reported that Season 3 won’t likely premiere until 2018. Esquire’s estimate is probably correct, since the update came from an interview with Julie Snyder, producer of Serial. Snyder said the podcast was delayed because of the team’s work on other podcasts, like S-Town. 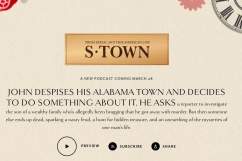 ‘S-Town’: What Time Is the Podcast Available?