On ABC, following a one-hour episode of The Bachelor, tonight airs the 2-hour Women’s Tell All Special. We’ve put together all the spoilers we could find, so if you DO NOT want any details on the episode, STOP READING NOW.

Okay, let’s get started with ABC’s official synopsis of the tell-all show:

Tempers flare and there are plenty of fireworks, as 19 of the most memorable women this season are back to confront Nick and tell their side of the story. There were highs and lows during Nick’s unforgettable season – and then there was Corinne, the most controversial bachelorette of the group. The very self-confident Corinne, who has been the woman viewers and the other bachelorettes have loved to hate, returns to have her chance to defend herself. Rachel, the recently announced new Bachelorette, shares some insight into how she plans to handle her search for love. Danielle L. and Kristina attempt to get some closure to their sudden and heart-wrenching break-ups. Then, take a sneak peak at the dramatic season finale and Nick’s final two women.

Now let’s get into what went down on season 21’s Women’s Tell All Special.

Liz Sandoz Stands By Her One-Night Stand With Nick Viall

If you remember Liz Sandoz, she’s the girl who hooked up with Nick Viall at Jade Roper and Tanner Tolbert’s wedding. On tonight’s special, Reality Steve reports:

Liz was the first girl on the hot seat, and is basically loved by all the other girls now. She talked about how women needed to support other women, and because she had a one night stand with Nick, women need to own their sexuality and not get shamed for it. Said she tried to see Nick after the one night stand but it didn’t work out, and the girls are defended her.

When Nick Viall chats with Sandoz, he sums up what he had already said on the show about feeling she originally missed the opportunity and that he questioned her intentions.

Taylor Appears to Be Hated By More Girls Than Just Corinne 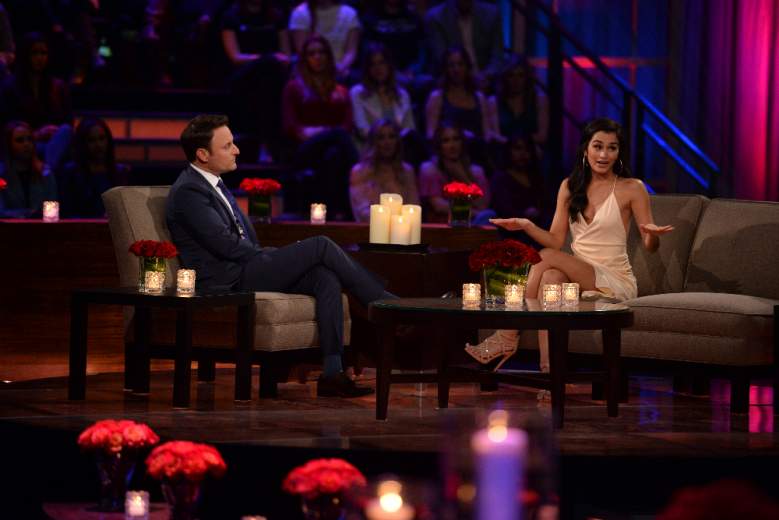 On the show this season, it was clear that Taylor Nolan and Corinne Olympios hated each other, especially after a few showdowns. Tonight, however, we see that it wasn’t just Corinne who was against Taylor as Reality Steve states:

Hailey and Astrid were one of the only ones to stick up for her as a lot of girls went after her [Taylor], namely Josephine and Lacey, who were apparently on a mission at the taping to make a name for themselves so they can be on Paradise … She said that she wasn’t there as a therapist but just as a woman, but she ended up being judged as a therapist and that put into question her work. Taylor said she made two close friends and stuck with them. Taylor said she doesn’t drink at all and felt left out because it was hard to join in on things when she was the only sober one …

The girls came hard after Taylor and it apparently was really bad. The girls were on her for acting like she was better than everyone else and keeping to herself and her close friends, who judging by the taping where Hailey and Astrid. They also accused Taylor of never giving Corinne a chance.

Apparently, Taylor tries to “make peace” with Corinne on the special, but Corinne isn’t really into it.

Corinne Gets Put In the Hot Seat

We all know that there are a lot of Corinne haters out there and that many of the women were not fond of her. Tonight, Reality Steve reports that:

Both Danielle’s, Astrid, Whitney, and Jasmine were some that were all over her. Kristina and Sarah both said that Corinne asked for people to take their complaints to her directly, but when they did she’d just get mad … The girls were asking her to explain the nanny thing, they attacked her on napping, and stealing Nick away … Corinne got defensive and acted like a child.

As for when all the Corinne drama began, the girls say that it started on the first group date when Corinne “alienated” herself. ABC reports that two women who definitely confront Corinne are Lacey and Sarah.

– Reality Steve reports that contestant Jasmine does a lot of talking on the special and that host Chris Harrison had a difficult time trying to get her to simmer down.

– ABC states that on tonight’s special:

After the pyrotechnics, climb aboard the Bachelor Bus with Chris Harrison and Nick, as they drop in on Monday night viewing parties and give Bachelor Nation fans the surprise of their lives. And then viewers get a look at the most hilarious bloopers from the season. Finally, it’s a sneak peek at the incredibly emotional final week of Nick’s journey. Nick is falling in love with two women.

– Rachel Lindsay talks about her heartbreak on the show and about her new gig as The Bachelorette.

– According to Reality Steve, producers dress up different people in the audience with t-shirts and hats that say things like “Make America Corinne Again” or “Intelligency.” They also dressed up someone in a shark costume.

– Beloved Kristina gets emotional when talking about her time on the show and she is well-liked by the other women. ABC reports:

The woman who won the hearts of America after sharing her heartbreaking story with Nick, Kristina continues to reveal what her life was like in the Russian orphanage and the choices she made in creating a new life for herself.

– Nick Viall gets confronted by a few women like Lacey, Danielle Lo, and Kristina and ABC writes:

The tension is palpable as the women, including Danielle L. and Kristina, grill him about whether or not they were given a fair chance and why they were sent home.

– Contestant Brittany Farrar doesn’t appear on stage and has to watch from the audience. She posted this message online about why:

Apparently being in a happy non bachelor relationship and having 0 desire to be on bachelor in paradise disqualifies one from being a part of the women tell all.

Below are the tweets:

Apparently being in a happy non bachelor relationship

Disqualifies one from being apart of women tell all

Read More
Reality TV, The Bachelor, TV
Tonight airs the 2017 Women's Tell-All Special for season 21 of The Bachelor. Get the spoilers on the episode here.