Feeling like I'm on top of the world! ?? Thanks for the views @empirestatebldg !! ?: @thejtsimon

According to TMZ, Chris Soules has been arrested for a hit-and-run car accident that left the other driver dead. Soules allegedly rear-ended a John Deere tractor trailer while he was driving a Chevy pickup truck. Soules was reportedly booked on the charge of leaving the scene with a death. Below is a photo of Soules’ truck, which he posted on his Instagram account:

The fatal crash occurred in Soules, where the former Bachelor star grew up and resides.

As far as Soules’ love life goes, it looks like he is single because he says the pickings are slim where he lives. Soules explained to People last month:

It’s been really, still hard. I feel like I’m saying this all the time, but you watch the show, and you watch the reason that I went on the show, because I live in the middle of nowhere, and there’s not a lot of women, so it’s hard to date.

Soules also said that he’s taken his head out of the dating game a bit. Soules revealed:

After dating 30 women on national television, I don’t know if it jades you a little bit, and if it doesn’t work out, you kind of feel like taking a break from dating. I’ve sort of been trying to be me and catch up on things that are really important to me that have been there for me for my whole life,” he added. “Whether it’s family, work, taking on some neat opportunities to raise money for charities. It’s kind of where I’ve put my focus instead of dating for a while.

According to Chris Soules, he’s been looking for the right woman to settle down with and have a family, but he’s very conscious about who he wants to welcome into his family. He says it’s just a matter of time before he finds “the one.” But, with his involvement in a fatal hit-and-run crash, Soules’ dating life will certainly take a backseat to his legal issues right now. In an interview with Us Weekly, Soules said that he had been asked to be on Bachelor In Paradise, but that he wasn’t sure if he would be participating in the show, which airs this summer. Soules dished that:

I don’t think my schedule will allow it honestly. I don’t know. Honesty, it looks like a lot of fun … When I went to be the “Bachelor”, I went to find a wife and I take this really seriously. I don’t wanna go into something like that where I’m disingenuous, you know? I don’t wanna make a fool of myself on national television.

Chris Soules and Bachelor winner Whitney Bischoff called off their engagement in May 2015. Today, Bischoff is engaged to a regional sales manager in Chicago, named Ricky Angel, according to the NY Post. 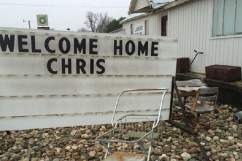